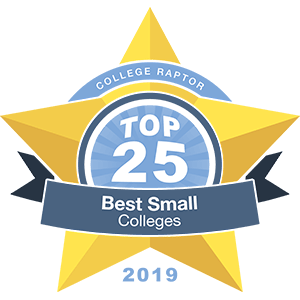 These colleges are the definition of small but mighty. Though they have a much smaller student body than most schools in the US, some of the nation’s top schools are featured here.

For the purposes of this list, we have defined a small college as a school that has 2,000 or fewer total enrolled students.

“Amore Ac Studio” is the Latin motto of Bates College, and it translates to mean “With Ardor and Devotion.” The college has a 22% acceptance rate. Economics, Political Science, Psychology, Environmental Science, and Biology are the most popular majors on campus. Bates has been featured in many hit TV shows, such as the Sopranos, Ally McBeal, and the Simpsons.

A liberal arts college, Bryn Mawr was the first women’s school to offer Ph.D’s. Even though the undergraduate college is all women, the school is actually one of the most diverse in the state. Students come from all over the country and the world to attend. Bryn Mawr college also has an amazing 8 to 1 student to faculty ratio.

Bowdoin College was established in 1794, and is technically older than the state it resides in, as Maine became an official state in 1820. Incoming Bowdoin freshmen, on average, score between 1380 and 1510 on the SAT, and between 30 and 33 on the ACT. Bowdoin’s colors are a classic black and white, and their mascot is a polar bear.

Located in the Upper West Side of Manhattan, Juilliard is world-renowned for its drama, dance, and music programs. Given its prestigious reputation, it’s no surprise that Juilliard’s acceptance rate is just 6%. The most popular major the school offers is Stringed Instruments, followed by Dance and Keyboard Instruments.

8. Cooper Union for the Advancement of Science and Art