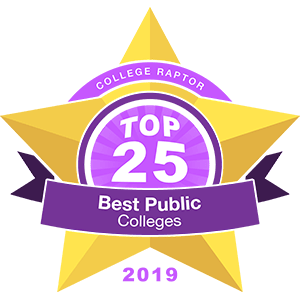 Public colleges tend to have lower sticker prices than their private counterparts, and can be just as prestigious and worthwhile. So we wanted to highlight the best public schools.

College Raptor has put together a list of the 25 best public colleges from around the United States.

Though Binghamton has a pegasus on its seal, their official mascot is the Bearcat. Of all the students studying on campus, 79% of them are considered undergraduates. Binghamton’s is located near the Susquehanna River. BU is part of the State University of New York (or SUNY) college system.

17. The University of Connecticut

Not only is UConn the flagship school, it’s also a land-grant, sea-grant, and space grant university. Navy blue, white, and grey make up their school colors, and the UConn mascot is a husky. They received over 34,000 applications last year and accepted 48% of the apps. Psychology is the most popular major.

16. The College of New Jersey