Often the face of a university, mascots are the epicenter of school spirit and hype when it comes to college sports. Many mascots are inspired by history or specially created by the student body. Some mascots, however, have a more interesting story behind them than others. 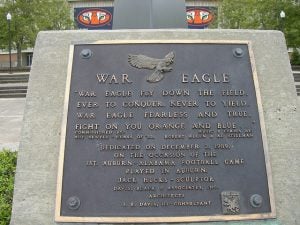 There are various legends as to how this unofficial “symbol of the Auburn spirit” came to be. The most popular legend is that a Civil War veteran had rescued an eagle. While attending a game in 1892 with his pet, the veteran’s eagle suddenly flew above the field, the sight of which inspired the Auburn Tigers to victory. The eagle then crashed to the ground. Dead. You can’t get more dramatic than that. 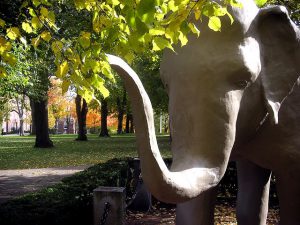 P.T. Barnum donated a stuffed elephant named Jumbo to Tufts University, poor Jumbo having been hit by a train. The university students quickly attached to their mascot. They would tug on its tail or place a penny in its trunk before exams for luck. Sadly, Jumbo seemed to have given all his luck away: In 1975, Barnum Hall and Jumbo went up in flames. Some of Jumbo’s ashes were recovered in a peanut butter jar that is passed down through the athletic directors. The ashes live in the athletic director’s office, where students continue to touch the jar for good luck. 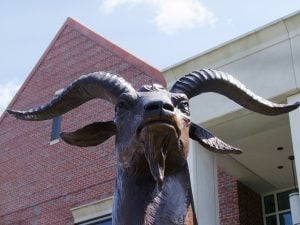 This oddly proportioned goat statue is the object of an eternal struggle between the classes at Worcester Polytechnic Institute. The rivalry tradition dates back to 1928, though it vanished every few years. The goat was brought back in 1996 (the original statue having been replaced). Six seniors waited for the man transporting the old and new statues to the school to be alone, The seniors snagged both goats from the unsuspecting man. They returned the old one to be stored, but the shenanigans have continued since. 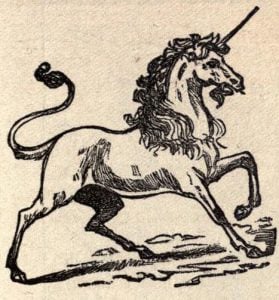 Sherman College had first decided on the Unicorn for their mascot for its symbolism of purity and strength against evil, but it didn’t turn out to be a very fierce mascot. The students at Sherman couldn’t rally around it as a mascot, and in 2007 the school changed it to a lion. While definitely more fierce than a unicorn (and, you know, real), a lion is definitely far more common. 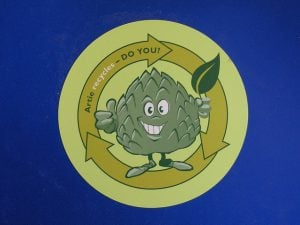 A period of student unrest in the 1970s led to the decision of the artichoke as the school’s mascot. The school attempted to nullify the results of the vote, but the students were persistent. Nowadays the school embraces their strange mascot with pride. 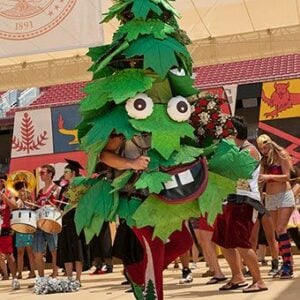 While the school doesn’t technically have an official mascot, the Stanford Tree, which is a member of the Stanford Band, has become widely viewed as the school’s mascot. The tree first made its appearance in the 1970s, and is said to represent the Redwood

tree that is popular in the Palo Alto area in California where Stanford is located.

Interested in any of these mascots and their schools? Use College Raptor’s free match tool to discover if they’re a good fit for you!