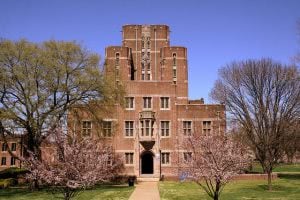 Be sure to check out Part One of our Colleges with Interesting Histories series, too!

Located in Nashville, Tennessee, Fisk University was founded by leading members of the northern American Missionary Association in 1866, six months after the Civil War ended. It is the first African-American educational institution to be accredited by the Southern Association of Colleges and Schools. Every building on campus has its own story associated with its construction.

The University of Virginia was designed by none other than Thomas Jefferson, one of the most compelling founders in US history, and highly revered for crafting the Declaration of Independence. The designs of the various university buildings stand as a testament of his mastery of Neoclassical and Palladian architectural styles. Thomas Jefferson also served as a Board member of the school. His vision for the university was to have professors and students living and learning together in close proximity.

One of the oldest women’s colleges still existing in the US, Judson College started off with a class of 9 female students in 1838. Today it is a fully accredited educational college for women, offering a variety of full four-year programs.

A public educational institution founded by William Hooper Council, a former slave, Alabama A&M University is a historically black institution. The college is located in Normal, Alabama, sprawled over 2,300 acres and designed by Frederick Law Olmsted, Sr., who is also credited with designing Central Park in New York.

The University of Mississippi played a significant role in the Civil Rights Movement, forever stamping its place in history. The enrollment of an African-American military veteran in the college in October 1962 resulted in riots on campus, which escalated despite intervention by President John F. Kennedy. The site turned into a war zone when a mob of about 2,500 protesters turned violent, killing and injuring several people and damaging buildings and vehicles. This led to the historic U.S. Supreme Court’s 1954 Brown v. Board of Education decision that declared racial segregation in public schools as a crime punishable by law.

Established in November 1775, just before American Independence, Hampden-Sydney College is the 10th oldest college in the US and among the oldest institutions of learning in Virginia. It started off in temporary wooden structures and has operated continuously through the years under various flags, including the British, Confederate, and United States flags. It was the last college that was founded before the American Revolution.

Talladega College was founded in 1867 by two former slaves and stands as a testament to the freedom struggle. Today, it has become a leading liberal arts institution serving 1,500 students, mostly African-American students.