13 Fraternities and Sororities Taking Philanthropy to The Next Level

Fraternal organizations are an undeniable presence on college campuses and have been since their inception in the late 1800s. They have grown from local, literary and debate societies into a community of international organizations with a total of 872,887 undergraduate members in the 2013-2014 school year.

With such a large number of members in the Greek community, they are able to make a huge impact on their communities and the world with the philanthropies that they support. Unfortunately, we often hear about negative stories related to this community,  while their charitable work sometimes flies under the radar. Hopefully, we can help to change that.

We’ve chosen 6 Fraternities and 7 Sororities that are doing amazing things to benefit their personal causes and raising some serious money. We looked at the most recent data available and found the 13 fraternities and sororities with the largest charitable donations in 2012.

Sigma Chi has partnered with Hunter Cancer Institute (HCI) to fight cancer. Through annual events like Derby Days, in which the sororities on campus compete in weeklong events, and more recently the Derby Challenge, the men of Sigma Chi raise money and awareness for HCI. Sigma Chi International Fraternity has pledged to donate 11 million dollars to HCI for cancer research over the next 7 years.

AGR leaves the decision of which organizations they would like to support through their philanthropic efforts up to each individual chapter and they have managed to raise millions for various causes around the United States. Since AGR is a professional-social fraternity with its roots in agriculture, many of the organizations they support have connections to agriculture as well. For example, Iowa State University’s Eta chapter hosts an annual BBQ B4 Books event to benefit The Heifer Project, and Louisiana State University’s Alpha Epsilon chapter’s annual “Alpha Gamma Rhaost off” benefits their local 4-H. 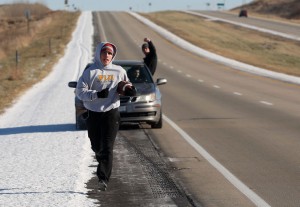 FIJI partners with the USO and The Red Cross. Events like the FIJI Rivalry Run, in which the brothers of FIJI from The University of Iowa and UW Madison run a football from a central location (Dubuque, IA) to their respective chapter houses during their rivalry week, help to raise money through donations and sponsorships. FIJI also donates hundreds of man-hours by volunteering for events like USO No Dough Dinners and blood drives.

$278,962 donated to various organizations (and more recently the USO)

In 2013 Theta Chi entered into a partnership with the USO. Through events like “GI Theta Chi,” each chapter is charged with raising $1,000. They have even implemented a competition between chapters to see who can raise the most money. Although this partnership is newer nationally, the men of Theta Chi have already made some huge contributions. Theta Chis are also still encouraged to devote their time an energy to local causes. Other causes that Theta Chi chapters regularly support include The National Bone Marrow Registry, The Starlight Children’s Foundation, reMIND and many others.

By hosting a variety of events like Purdue University Indiana Beta Chapter’s volleyball tournament and participating in Dance Marathon and Phone-A-Thon at colleges across the country, SAE helps to raise funds for the Children’s Miracle Network. Their fundraising efforts go directly to research, supplies, and uncompensated care. The men of SAE also participate in the TG Day of Service each year in conjunction with the Global Youth Day of Service. 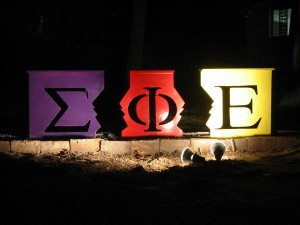 As the largest national fraternity, Sig Ep is able to make a serious impact for their national philanthropy, Big Brothers Big Sisters. By participating in bowling nights, volleyball tournaments, and many other events throughout the year, Sig Ep members raise big money for the national mentoring organization each year. They also donate their time and act as mentors in the program. 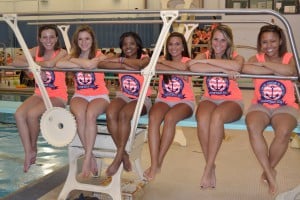 Delta Gamma’s motto is “Do Good” and the women of DG have chosen Service for Sight as their national philanthropy. They raise money through annual philanthropy events, including, their most popular event across all campuses, the DG Anchor Splash, a swimming competition that combines both serious and silly races, as well as synchronized swimming routines. The event raises awareness for eye safety and the visually impaired while also raising money for Service for Sight. During the 2014-15 year, DG raised almost two million dollars nationwide! 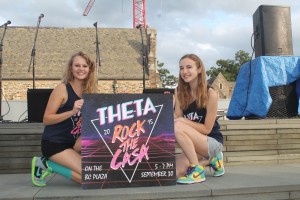 For over 25 years Theta has been working with Court Appointed Special Advocates (CASA) for Children. By hosting countless concerts, like Duke University Beta Rho chapter’s Rock the Casa, fashion shows, and 5Ks, Thetas have raised over a million dollars for CASA since their partnership began. The time and effort that Thetas across the country put into their philanthropy events and community service has helped countless children and is sure to help thousands more.

Reading Is Fundamental (RIF) is an organization that motivates and encourages young people to read. With 35% of high school students reading below grade level, the work that RIF is doing is incredibly important. Kappas host events like Reading is Key, put on by University of Missouri’s Theta Chapter, to raise money for RIF and donate books to local children in need. 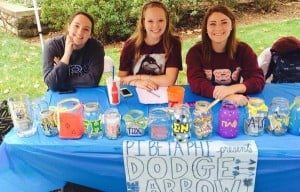 Pi Phi also champions literacy for their philanthropic efforts. Fundraising through multiple events like Dodge The Arrow, a dodge ball tournament for First Book put on by Virginia Tech’s Virginia Zeta Chapter, and mentoring students are just a few of the ways that Pi Phis are fighting for literacy.

$521,380 donated to The Arthritis Foundation

Alpha Omicron Pi’s national philanthropy is the Arthritis Foundation. Through events like Strike out Arthritis, AOII goes Blue, and Run for the Roses 5k/10ks (like the one put on by Iowa State University’s Iota Sigma chapter which also includes an omelette breakfast), AOIIs across the nation have raised over 2 million dollars for arthritis research since their partnership with The Arthritis Foundation began in 1967, and more than half a million in 2012 alone!

$497,675 donated to Girls on the Run International 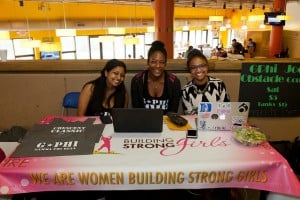 With the next generation on their minds, Gamma Phi Beta’s national philanthropy focuses on “Building Strong Girls”. Partnering with Girls on the Run International, GPhis motivate and encourage young women to live healthy lifestyles and have confidence in themselves. With events like UNC Asheville Epsilon Psi Chapter’s annual Crescent Classic pancake dinner, Duke University Eta Mu Chapter’s GPhi Jo, and University of Missouri Alpha Delta Chapter’s 5K, GPhis are raising money and donating their time to empower the young women in their communities.