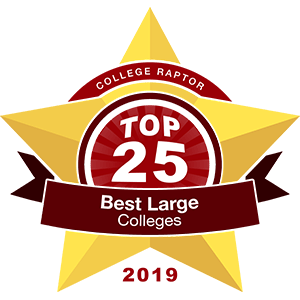 These colleges are the definition of large and in charge. Big schools have lots of students and lots of opportunities. Some of the very best large colleges in the US are household names!

What makes a college “large” might depend on who you ask, but for the purposes of this list we’re considering any school that has 10,000 or more total students.

Check out College Raptor’s list for the top 25 best large colleges of 2019!