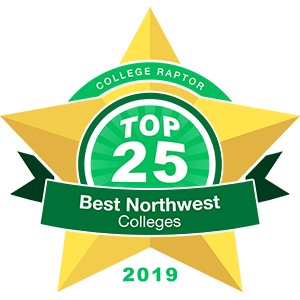 The states of the Pacific Northwest provide diverse landscapes, cities, industries, and of course colleges.

Including the states of Oregon, Washington, Idaho, Montana, Wyoming, Alaska, and Northern California, this region has a school for everyone.

Here are College Raptor’s top 25 best colleges in the Northwest!

A member of the Christian College Consortium, the Seattle Pacific University is a liberal arts school with just over 3,000 students. The most popular majors include business, nursing, psychology, speech communication, and English. The university focuses on showing how Christian faith can influence the school, students, and community.

24. University of the Pacific

This private university holds many “first honors.” The University of the Pacific was the first medical school and first conservatory of music on the West Coast as well as the first independent co-educational college in California. They also hold the title of being the oldest chartered university in the state. A member of the NCAA, they have just over 300 athletes with focus on Basketball, Baseball, and Track.

One of the oldest universities in the state, the Dominican University of California is a small private school with under 2,000 students attending. With a 9 to 1 student to faculty ratio and an 86% first year retention rate, the university also ranks well for four year graduation rates in the Pacific West Conference.

With athletic teams called the Vikings and colors of bay blue, Western blue, and white, the Western Washington University is one of only six public universities in the entire state. The most commonly chosen majors tend to be psychology, computer sciences, sociology, and environmental science.

At Pacific University, the student experience is about more than academics. They receives about 2,590 applications and around 84% acceptance rate in every admission. Business Administration and Management in General happened to be their top major with a total number of 50 students.

USF’s main campus, nicknamed “the Hilltop”, is located near the famed Golden Gate Bridge. Their school colors are green and gold, and the sports teams are known as the Dons. They received over 16,000 applications last year. A majority of students at USF are from California—71%, in fact.

Every year, nearly 6,000 applications are sent in to the University of Puget Sound, and around 5,000 are accepted. There is an 11:1 student-to-faculty ratio and a first year retention rate of 86%. While 18.70% of the students come from Washington, 33.1% come from the state of California.

Named after the famed explorers, this college has a Latin motto fitting of its namesake—”Explorare, Discere, Sociare” meaning “To explore, to learn, to work together.” It’s been a coeducational college since its foundation, though nowadays there are more women studying at the school, as 61.4% of the undergraduate class are women.

Rudy the Redhawk is the mascot of Seattle U, where the school colors are red and white. The acceptance rate is 74%, meaning that nearly 6,350 applications were accepted last year of the total 8,576. Among the alumni of this university is Jim Whittaker (class of 1952), the first American to summit Mt. Everest.

Located on a bluff overlooking the Willamette River, the University of Portland is affiliated with the Roman Catholic church. 87% of all students on campus are undergraduates, while the remaining 13% study at the graduate level. The University of Portal has a 12:1 student-to-faculty ratio.

Spike the Bulldog is the mascot of this university, where the sports teams are also known as the Bulldogs. They participate in NCAA Division I (without football), and have 364 athletes on campus. 25–30 are the average ACT scores of incoming freshmen; for the SAT the average is between 1220 and 1380.

Reed College features a griffin on its seal, which doubles as the school’s mascot. Their official school color is Reed Red (formerly Reed Rose). The campus is located just off the Willamette River. English is the most popular major at this college. They have an 82% six year graduation rate.

Santa Clara University was founded in 1851, making the oldest operating institute of higher learning in the state of California. Receiving around 15,000 applications a year, Santa Clara will accept just over 8,000 of them. They have an 11:1 student-to-faculty ratio and a first year retention rate of 96%.