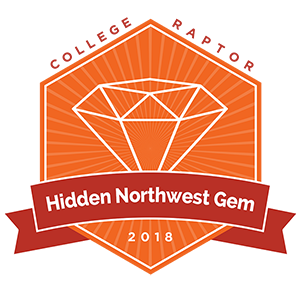 The Northwest region of the United States is known for its scenic beauty. There are a number of hidden gem-worthy colleges in the region as well. We’ve highlighted the top three hidden gem schools per state.

For the purposes of this list, we’ve included the following states in the Northwest: AK, Northern CA, ID, MT, OR, WY, WA.

Situated on Auke Bay, UAS has a scenic campus. The university has a 9:1 student to faculty ratio, and nine residence halls–most of which are named after elements of nature native to Alaska. Though UAS no longer has an intercollegiate sports program, students can participate in a wide array of intramural sports. Spike the Humpback Whale is the school’s mascot.

“Veritas Fax Ardens”–meaning Truth is a flaming torch–is the motto of this small university. Dominican has a unique tradition that accompanies their Convocation ceremony. Seniors present the freshman class with a shield, emblazoned with an inspirational motto to guide them through their collegiate years.

Cal Maritime students are known as the Keelhaulers, though informally the female sports teams are called the Sea Hags. The campus is situated on San Pablo Bay, where they have a their practice ship, the T.S. Golden Bear III, anchored. They have a first year retention rate of 85% and a majority of the students are from California.

The three most popular majors at Northwest Nazarene are Business Administration, Elementary Education, and Registered Nursing. They have a 95% acceptance rate and more than double the number of undergraduate than graduate students. Their sports teams are known as the Crusaders.

The College of Idaho

A large majority of the student on this campus are undergraduates–97%, in fact. There is a 50/50 split between the percentage of male and female students that attend the college. A small 8:1 student-to-faculty ratio gives the college a close feeling. Their sports team mascot is a Coyote.

Named for the famous explorers, the Lewis-Clark State College has a high acceptance rate of 97%. Among the most popular majors on campus are Business, Elementary Education, Social Work, Management Science, and Criminal Justice. They have three school colors: navy, white, and red.

Montana Tech of the University of Montana

Montana Tech was originally developed as a mining school, that offered only two degrees–mining and electrical engineering. Now, even though the school offers a multitude of majors and minors–that original mining connection still shines through. Their mascot is Charlie Oredigger, and their school colors are copper and green.

The University of Great Falls has an acceptance rate of 56.9%. They have a student to faculty ratio of 12:1. Their sports teams play as the Argonauts, named after the Greek heroes aboard the legendary ship, the Argo. A unique and popular sport on the campus, for both male and female students, is rodeo.

All students attending the Linfield College–McMinnville Campus are undergraduates, with about 464 freshman. A majority are from the West Coast, though some do come from Ohio, Colorado, and Texas.  With a student to faculty ratio of 11 to 1, approximately 82% of students will stay at the college after their first year.

George Fox University is a member of the NCAA, and is a Division III school with football. 64% of applicants are accepted (generally about 1,990 out of 3,120). Most students had test scores between 21 and 27 on the ACT, or 980 and 1,210 on the SAT. The school was originally founded for Quakers in 1885, and is now a school for liberal arts and sciences and professional studies.

Favored majors at Pacific University are Business Administration and Management, Kinesiology and Exercise Science, and Biology/Biological Sciences. Though independent of the United Church of Christ (its founders), the school maintains a close working relationship with the UCC. Around 2,840 hopefuls apply each year, with 2,200 (79%) being accepted.

Whitman’s inspirational school motto of “Per ardua sergo” translates to: Through adversities I rise. The most popular majors on this campus are Biology, Psychology, Biochemistry / Molecular Biology, and Political Science. Almost 4,000 applications are sent to this private liberal arts school each year.

Located right in the famous city of Seattle, even outside of studies, students will never find a shortage of activities, both off campus and on. With great culture and personality, the University’s motto is “Engaging the Culture, Changing the World™.” The campus is home to some of the oldest trees in Seattle and a wilderness field dedicated to biology at the school.

The University of Wyoming is both a flagship school and a land grant college. They have a NCAA Division I-FBS athletic classification. UWyo has two mascots–Cowboy Joe and Pistol Pete, with Cowboy Joe being a live pony, and Pistol Pete a costumed student.  Their school colors are brown and and gold.