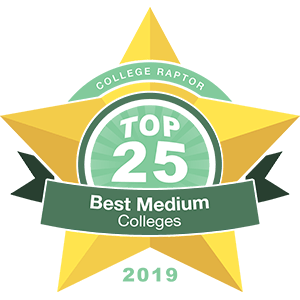 Medium-sized schools offer students the chance to meet many different people without totally getting lost in the crowd, and explore plenty of opportunities without getting overwhelmed.

For the purposes of our list, we are considering schools with total student enrollments of 2,000 to 10,000.

Here are College Raptor’s picks for the 25 best medium-sized colleges.

Located near the historic Charles River, Brandeis is named after the very first Jewish Justice of the Supreme Court—Louis Brandeis. Their mascot is named Ollie the Owl, and the school colors are blue and white. Brandeis has a 4 year graduation rate of 80%, which jumps up to 86% in 6 years.

Lehigh is often considered a “Hidden Ivy” school. Nearly 14,000 applications were sent in last year, and Lehigh accepted almost 3,500 of them, giving the school an acceptance rate of 25%. The range of 28–32 is the average ACT score for incoming freshmen, while the range of 1320–1450 is average for the SAT.

Wesleyan has a plethora of notable alumni and faculty in her ranks, including playwright Lin-Manuel Miranda, writer/director Joss Whedon, Blue Man Group co-founder Chris Wink, and author D.B. Weiss. Wesleyan has a 16% acceptance rate. The most popular major on campus is Economics, followed by English and Political Science.

10. College of William and Mary

Dartmouth’s Latin school motto, “Vox clamantis in deserto”, translates to mean “A voice crying out into the wilderness.” It has a 7:1 student-to-faculty ratio, and a 4 year graduation rate of 86%. Of the total students at Dartmouth, 67% are undergraduates, while the remaining 33% are graduate students.