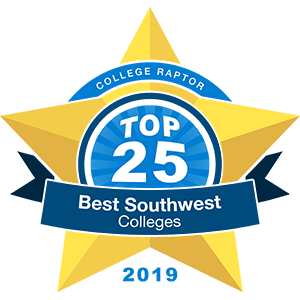 The Southwest region of the United States is full of interesting history, beautiful landscapes, and plenty of great colleges and universities. And some of the countries best colleges are located in the Southwest!

For the purposes of this list, we consider the following states to make up the Southwest: Southern California, Nevada, New Mexico, Arizona, Utah, Colorado, Texas, Oklahoma, and Hawaii.

Check out College Raptor’s top 25 best colleges in the Southwest!

Crimson and blue are the colors of the LMU Lions. Marketing, Speech Communication, Psychology, Finance, and Political Science are the five most popular majors on this idyllic campus. Of the nearly 15,400 applications sent in, LMU will accept almost 8,000 of them, giving the university a 52% acceptance rate.

Created under the historic Morrill Act of 1862, Texas A & M University is the proud and diverse home of the Aggies, when they were first established as an agricultural and mechanical school.  Located in the Dallas/Houston/Austin triangle, Texas A & M is one of the few universities in the United States to host a Presidential library, the George Bush Presidential Library.

Southern Methodist University, also known as SMU, is known for its innovative programs, small classes, and international study opportunities. Average ACT scores from incoming freshman range between 28 and 32, while for SAT scores the range is 1310–1460. Finance is the most popular major at SMU.

UC — Santa Cruz is a small, cozy coastal campus located in central California, near scenic Monterey Bay. Undergrads have a choice of 65 majors to choose from. The official campus mascot is definitely a unique one—Sammy the Banana Slug, which by their own admission is an unusual choice.

Though Colorado College of Mines focuses mostly on science and engineering, students still have over 70 undergraduate degree programs to choose from. Colorado College of Mines encourages STEM studies and programs. Often just called “Mines” this college’s school colors are blue and silver, and their mascot is Marvin the Miner and Blaster the Burro.

Located in the heart of San Antonio, Trinity University is a highly selective school, with an acceptance rate of 38%. The school’s mascot is a tiger and their school colors are maroon and white. They have an 8:1 student-to-faculty ratio and a 73% four year graduation rate, which jumps up to 83% in six years.

Blue and orange are Pepperdine’s school colors. They compete as the Waves, and their mascot is named Willie the Wave. On average, incoming students score between 1230 and 1410 on the SAT, and between 25 and 30 on the ACT. Business is the most common major on this beautiful campus, followed by Psychology.

17. University of Texas at Austin

The University of Texas — Austin is known not only for their beloved mascot, a Texas longhorn steer, but also for their marching band with its world-famous Big Bertha, the world’s largest bass drum. The school’s acceptance rate is around 36%. Over 3/4ths of the students on campus study at the undergraduate level.