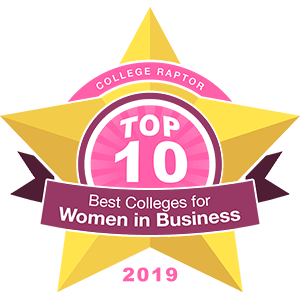 Did you know that only 4.8% of Fortune 500 CEOs are women? Business is by far and away the most popular major in America, and female students make up nearly half of business degree-earners.

With that in mind, we wanted to highlight some schools dedicated to helping women advance their careers. To be considered for this list, at least 10% of total degrees conferred have to be business degrees. The colleges had to be within College Raptor’s top 800 schools. We then selected schools with the highest percentage of women earning business degrees.

Here are the top 10 colleges for women in business!

Siena has strong ties to the Roman Catholic church, and was founded by an order of Franciscan friars. Their athletic teams are known as the Saints, and the mascot is a St. Bernard dog (also named Saint). Appropriately, their fight song is the lively When the Saints Go Marching In.

Suffolk counts mayors, US Federal and State judges, Congress members, and journalists among their alumni. The university has a student-to-faculty ratio of 13:1. 56% of the incoming freshman at Suffolk come from Massachusetts, but many others come from the surrounding states of Connecticut and Delaware.

Of the over 14,700 applications sent in last year, USD accepted almost half of them. Between 25 and 30 are the average ACT scores of incoming freshman; for the SAT the range is 1230 — 1380. Blue and white are USD’s school colors, and they compete as the Torero in NCAA Division I sports.

The University of the Redlands always has a real bulldog as their mascot. Their school colors are maroon and gray. In 1913, students carved a large R into the side of San Bernardino mountain, and remains there to this day. Of the total number of enrolled students, 64% of them study at the undergraduate level.

Special Products Marketing Operations is the most popular major at this university, followed by Marketing and Finance. St. Joseph’s has a 91% first year retention rate, and a six year graduation rate of 79%, both well above the national average. Nearly 9,000 applications are sent in every year.

Initially founded as a men’s college in 1912, Saint Mary’s University became coeducational in 1969. Interestingly, more women now study at the college than men. 53.7% undergraduates are women, and so are 69% of the graduate students. There is an on-campus cross-country skiing and running trail for students to enjoy.

One of the oldest schools in the City University of New York system, Baruch has a 29% acceptance rate. Of the 21,400-some applications that are sent in yearly, Baruch will accept around 6,200 of them. In the athletic circuit, they’re known as the Bearcats, participating in NCAA Division III sports.