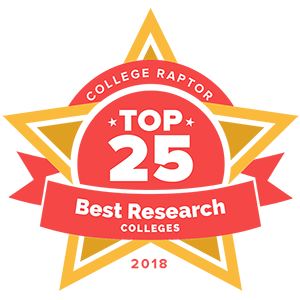 These colleges and universities are examples of academia at its finest. While many of these research-heavy institutions have outstanding undergraduate programs, a great emphasis is put on their graduate and doctoral programs.

At research universities, students can earn their PhDs and go out into the world to change it. So we’ve come up with a list of the best of the best.

25. College of William and Mary

Berkeley, the result of an 1868 merger of the private College of California and the public Agricultural, Mining and Mechanical Arts college, is the oldest research university in the UC system. The school’s faculty, alumni and researchers make up an impressive group which includes Nobel laureates, Academy Award winners, and Olympic gold medalists.

Thomas Jefferson, James Monroe, and James Madison (among others), helped select the city of Charlottesville to be home to the university. Here you’ll find liberal arts studies and business to be the most popular majors. Notable UVA alumni are Olympians, astronauts, and US leaders, including former president Woodrow WIlson.