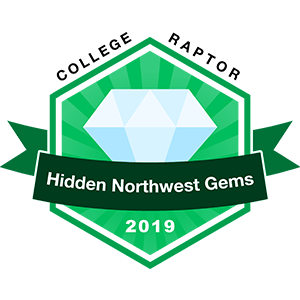 The Northwestern region of the United States is known for unique landscapes and lifestyles, but there’s one aspect that doesn’t get the attention it deserves—colleges! Which is why we decided to highlight some of the best hidden gem schools in the Northwest.

For this list, we’ve included the following states as part of the Northwest: Alaska, Idaho, Montana, Wyoming, Washington, and Northern California (anything north of San Jose).

We’ve included the top three hidden gem schools for each state. However, this year Wyoming did not have any colleges that met College Raptor’s requirements so it is not featured. Additionally, some states may not have had three colleges that qualified.

Here are College Raptor’s picks for hidden gem colleges in the Northwest!

An extremely small school, Alaska Pacific University recently started a partnership with the Alaska Native Tribal Health Consortium in order to better focus on the state and needs of Alaskan natives. Home to the Nordic Ski Team, the center was designed to be an Olympic cross-country skiers training facility. Each year, APU regularly sends at least one skier to the Winter Olympics.

Part of the University of Alaska system, Southeast is one of four campuses and accepts 70% of applicants. In addition to courses in Arts and Sciences, Career Education, and Education, the university also offers an Outdoor Skills and Leadership Certificate. This is a nine month program that helps students understand the natural world, their relation to it, and the skills needed to survive in the wild.

The oldest private liberal arts college in Idaho, the College of Idaho was founded in 1891 with only 19 students. Today, it boasts nearly 1,000 and has dozens of majors, minors, and programs available. About a third of students are in an athletic program and the school is known for its skiing, basketball, and track. The Outdoor Program is a popular student organization which includes activities like hiking, fly fishing, stargazing, rafting, and more.

Northwest Nazarene University is a Christian and private liberal arts college in Idaho with the motto “Seek Ye First the Kingdom of God.” The school focuses on transformation of the entire student. Business Administration is the most popular major at the university, but Nursing, Elementary Education, and Social Work are also common choices.

In 2017, the Lewis-Clark State College accepted all students who applied to the school. Part of the Frontier Conference and with about 200 athletes, the teams are currently known as the “Warriors.” However, in the past they were also known as the Pioneers and the Loggers.

“Not For School, But For Life” is the motto of Carroll College. A private liberal arts school, the college is well known for its Pre-Med and Nursing majors. Although many students study Nursing and Health services, Biology is also a common choice. The school’s Neuman Observatory is the oldest observatory in the state.

Part of the University of Montana system, Montana Technological University is commonly called Montana Tech. Almost all students who apply to this school are accepted. The most popular major at the school is Petroleum Engineering, but many also choose to pursue degrees in Engineering, Business, and Occupational Health. Montana Tech is also known for its Ph.D. in Materials Science.

Rocky Mountain College got its start as the Montana Collegiate Institute in 1878. Although Business is the most popular major choice at the school, the college also offers unique programs in Aviation and Equestrian Studies. Almost a third of the students take part in athletics where they are known as the Battlin’ Bears.

At Pacific University, the student experience is about more than academics. They receives about 2,590 applications and accepts around 84% each year. Business Administration and Management in General is their top major with a total number of 50 students.

George Fox University was originally a school for Quakers and known as the Friends Pacific Academy in 1885. It didn’t receive its current name until 1949, which honors the founder of the Quakers. Business Administration is by far the most commonly chosen major, with Nursing, Social Work, and Elementary Education also being popular.

“Per ardua surgo” is the motto of this college, translating to mean “Through adversities I rise.” Whitman accepts just over half of all the applications they receive. On average, incoming freshmen score between 26 and 31 on the ACT, or between 1240 and 1430 on the SAT. Whitman has a cozy 8:1 student-to-faculty ratio.