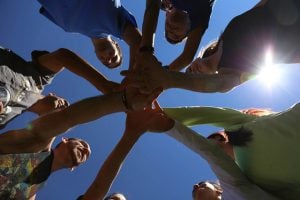 This past May, I graduated from college after four years of working hard, barely working, and everything in between. My younger brother is heading into his sophomore year of college, and several friends and family have kids heading away for the first time, ready to tackle their freshman year with gusto. I can’t help but put myself in their shoes, quivering outside my freshman dorm, clutching a backpack that was half my size, waiting to see what would happen when I walked through the doors of the hall.

The best piece of advice I can give to anyone going to college for the first time? Two words: Pay attention. I don’t just mean in class, though that’s important too, I guess. Listen to everything, from the advice of those who have been there before to the announcements made on campus to the people around you. Keep your eyes and mind open, and you’ll never know where you can go.

One of my most distinct memories come from my mother’s parting words to me, on the first day: “You’re about to make a friend you’ll have for the rest of your life”. I probably rolled my eyes and told her she was crazy. Thirty minutes later, I met a tall boy with brown hair and a nervous look on his face as he pretended to be interested in examining my roommate’s watch. His name is Rob, and he became my roommate for the next three years—and my best friend at college. If I had listened to my mother, maybe I wouldn’t have been as nervous when I walked into Onondaga Hall for the first time.

Listening is important, in the metaphorical sense, but also in the literal sense. I’ll give you an example: settling in was difficult, and I missed home, my tight-knit high school crew, my parents, and even my little brother. For the first few weeks, I was kind of a shut-in. I rareley left my room except to go to class and have dinner. Then, one day, when I was walking through the student union, I heard an announcement: “Sign-ups for intramural sports are now open!” Why not? I thought, and texted Rob to see if he wanted to join.

We threw together a ragtag crew of kids from our floor, and soon, we were playing every sport there was. Football, softball, kickball, even broomball (best described as field hockey played on ice, but not actual hockey—it’s hard to explain). That one announcement in the union had netted me a new group of friends and activities nearly every night.

As I moved throughout my college life, I kept my eyes and ears open. I joined the staff of the literary magazine after hearing about it through a friend. Before I knew it, I became a die-hard supporter of the hockey team after seeing an ad for tickets. I owed all this to the mantra that repeated in the back of my head. Pay attention. Pay attention. Eyes open, ears open. I found friends, things to do, and new classes through my newfound commitment to observing everything. I started to pay more attention in class and found myself a regular on the Deans’ List, much to the excitement of my parents.

When my brother left for college last fall, I told him that the most important advice I could give was, you guessed it, to pay attention. He was confused by what I meant, but I told him he’d know. When we reunited at Thanksgiving, he thanked me. His grades were through the roof, he’d joined the ultimate frisbee team, and he’d made so many friends that he was torn between living in three different buildings for the next year.

While my own experiences, of course, are unique to my situation, paying attention and keeping an open mind can never steer you wrong in college. You should always be willing to try new things, even if you’re frightened. Funnily enough, my college essay was about my willingness to try new things, citing a time I ate Rocky Mountain Oysters (Google them) as an example. However, once I actually got to campus, I realized that adaptability was a lot bigger than trying new foods. Adaptability was a direct result of how much attention you gave your surroundings.