The Youngest College Graduate (And 6 Other Incredibly Grads)

Many students who enter college may feel that they are too young and unprepared for the journey that lay ahead. The academic rigor can be intimidating. Parents wonder how their child will handle having so much autonomy over their schedule and choices can impact their entire future. How is an eighteen-year-old supposed to handle it?

Who is the Youngest College Graduate? 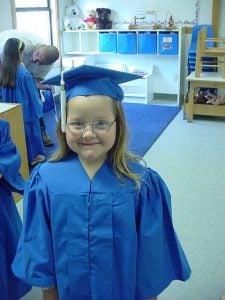 Well, if you think eighteen is awfully young to be faced with the challenge of college, consider doing it at eight years old! The youngest college graduate ever enrolled at age eight, graduated with his bachelor’s degree at ten, and his first master’s at fourteen.

Here are just seven of the youngest college graduates! We also provided some tips you can use to graduate high school and college a bit faster.

Seven of the Youngest College Graduates

Michael Kearney holds the Guinness World Book Record for being the youngest college graduate ever. He was born in Honolulu, HI where he was homeschooled by his mother. He was diagnosed with ADHD, but that didn’t hold this child prodigy back.

Kearney began to read at 10 months old and finished his high school education in one year. He holds a bachelor’s degree in anthropology and two master’s: one in chemistry from Middle Tennessee State University when he was 14 and one from Vanderbilt University in computer science when he was 18. Kearney would earn his doctorate in chemistry 4 years later from Middle Tennessee.

Describing his education, Kearney stated, “Most people, they get into school when they’re 6, and they get out of school around 22, 23…. I just happened to be in college that entire time.” Kearney’s college route may have been nontraditional, but certainly successful. Since then he has been a game show contestant, where he has won thousands of dollars, and is currently a teaching assistant in chemistry at Middle Tennessee State University.

Moshe Kai Cavalin, after enrolling in East Los Angeles Community College at the age of 8, would earn his associate’s degree in mathematics at the age of 11 with a 4.0. He would then enroll in the University of California – Los Angeles where he had a full scholarship and graduate at 15. He earned his Master of Science in information security management at 18 from Brandeis University and another master’s two years later from Arizona State University in marketing. In between his master’s, Cavalin was a Student Engineering Intern at NASA!

Today, Cavalin is a product manager for Intel. He is very insistent that he is not a genius and asks that people do not call him one. In addition, he’s published two books and has won martial arts championships.

Laurent Simons is one of the most recent young college graduates! From Belgium, Simons nearly graduated before his 10th birthday but was unable to take the required tests at his previous school of Eindhoven University. He went on to attend the University of Antwerp where he just recently earned his bachelor’s in physics at the age of 11.

Hailing from Portland, Oregon, Sho Yano has one of the highest IQ’s in the world – 200! That isn’t his only impressive test score, though – he earned a 1500 out of 1600 on the SAT. He’d also been reading since 2 years old and composing for the piano at age 5. Yano started his college education at Loyola University Chicago at 9 years old.

He would go on to attend the University of Chicago in the Medical Scientist Training Program, earn his doctorate in molecular genetics and cell biology at 18, and become the youngest MD graduate from the school at 21. Today, Yano is a pediatric neurology resident at the university.

Gregory Smith left elementary school in just one year and would enroll in college by the age of 10. There, he studied calculus, French, and physics and would earn his bachelor’s degree in mathematics at only 13 years old. After that, Smith earned a master’s in mathematics from the University of Virginia at 16, another master’s in computational biology at 19 from Carnegie Mellon University, and a PhD in biological sciences from CMU as well 6 years later.

Smith states that he had to grow up quickly, but definitely still had plenty of friends his own age. Today, he studies stochastic gene expression to “build better drugs” at Mount Sinai.

At just under 19 years old, she was the youngest ever professor in the world in a temporary position at Konkuk University in Seoul through Stony Brook University. Since that experience, Sabur has worked on creating tools for medical research and devices.

From Manchester, England, Eugenie Carys de Silva would finish high school at just 11 years old. From there, she would attend the American Military University and graduate at age 14 with a 4.0 GPA and a degree in Intelligence Analysis. A year later, she earned a master’s in Intelligence Studies from the school, as well as a second master’s from Harvard in Extension Studies and a Mphil from University of Cambridge in Education, Globalization, and International Development. The youngest student to graduate from Harvard, de Silva would also receive a PhD in Politics from the University of Leicester in England.

Since completion of her studies, de Silva founded the International Association of Child Prodigies, is a student ambassador for the American Military University, and currently works as a Senior Consultant for Booz Allen Hamilton.

How Can You Graduate Faster?

While you probably are past the age that would qualify you for the “youngest college graduate” titles, there are ways you can speed up your graduation whether you’re at high school or college!

To Graduate from High School Faster

It is entirely possible to speed up your high school education. There are quite a few students who graduate after just 3 or 3.5 years at their school.

First, you need to talk to your guidance counselor before you can graduate high school in less than four years. You will need their approval and also their assistance in creating your schedule. They have to ensure you’re meeting state requirements in order to earn your degree. In order to graduate early, you may have to take summer or online classes or take a rigorous schedule.  Your parents and the school administrators will also have to be on board.

It’s not always recommended that you graduate high school early. By taking the four years, you have more time to take advanced classes, apply to colleges, and impress those schools by participating in extracurriculars. If you have a very rigorous schedule, you might not have time for those extra experiences.

To Graduate from College Faster

Plenty of students graduate from college quickly! And doing so can save you quite a bit of money in college expenses – you’ll still have to pay for those credits, but you’ll save elsewhere, like room and board. In order to earn your associate’s or bachelor’s faster than other students, you should:

These young college graduates certainly proved that age doesn’t have to hold you back. While many of them may have faced scrutiny and extremely unique challenges, they pursued their dreams and achieved them. Even if you weren’t reading before your first birthday, graduating college before driving, or breaking world records, you can definitely be inspired by their motivation and find ways to incorporate their drive in your own life.