How College is Different Now Than When Your Parents Attended 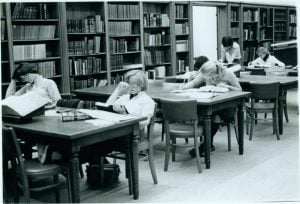 For the most part, the parents of today’s college students graduated in the 1970s and ’80s. Our society and the world we live in have changed drastically since that time and college is no exception. Clearly, the rapid development of technology over the past few decades has changed the way we live, work and learn. With that, new information and areas of study have been produced and expanded. As we continue to grow our minds and build our tools, it is interesting to look back and see how college has changed over the years to get us to where we are today.

One way college has changed is through the integration of technology. It is nearly impossible for today’s college students to imagine their academic career without a laptop or Google. However, such was the case for our parents when they were in school. According to the Computer History Museum, the personal computer we know today was in the early stages of its development in the mid-’70s and was not widespread until the early 1980s with the release of the IBM PC and Apple Lisa computer followed by the notorious Apple Macintosh computer of 1984. Laptops and portable technology had not become commonplace until the ’90s. Even with this impressive hardware for the time, Google was not established until 1998.

Today, computers and search engines are the main tools used for college students to gather and organize information. With the pivotal development from computers to laptops to smartphones, students have every piece of information at their fingertips and can access it more quickly and efficiently than ever before.

With new technology, come new majors and areas of study. New majors have cropped up in the past decade, many due to technological advancements. For example, students can now study social media and how to effectively use different platforms in marketing, sales and communication strategies. Similarly, New Media is a major that explores media consumption on digital devices. Not surprisingly, computer science and its related fields have also come to fruition such as with digital forensics which is now offered at 3 schools throughout the country. Technology has also furthered engineering-related majors such as Biomedical Engineering, Robotics, and even Nanotechnology.

College tuition fees have skyrocketed since the ’70s and ’80s. According to CollegeBoard, tuition and fees for a private, nonprofit, 4-year University cost $10,088 in 1975 and that price has jumped to $32,405 for the 2015 academic school year. Similarly, the tuition fees for public, nonprofit, 4-year schools have increased as well, averaging $2,387 in 1975 and $9,410 in 2015. Clearly, the issue of affording college has become more prominent over the past 40 years, but with scholarships and financial aid, it is still possible for students to pursue an academic career.

Unsurprisingly, with higher tuition costs come higher rates of student loan debt. According to Student Loan Hero, the average student loan debt for the class of 2016 was $37,172. To give some perspective, a typical monthly payment on these loans is $351/ month. Today, Americans owe approximately $1 trillion in student loans with 40% comprised of graduate degrees. The average MBA student graduates with $42,000 in debt and those pursuing a career in the medical and health sciences can owe up to a whopping $161,772. This in comparison to an infographic provided by the Center for Online Education illustrating our parents’ student loan debt. Those graduating from college in the ’70s in ’80s, on average owed $10,000 in student loans which approximate to $21,000 today accounting for inflation. In 1986, Americans owed approximately $10 billion which is far less than the $1 trillion we’ve accrued to date.

Those numbers can be pretty daunting. Luckily, College Raptor can help you compare real college costs and save you money in the long run—and we’re completely free!