The 25 Best College Rankings 2016 in the Southeast 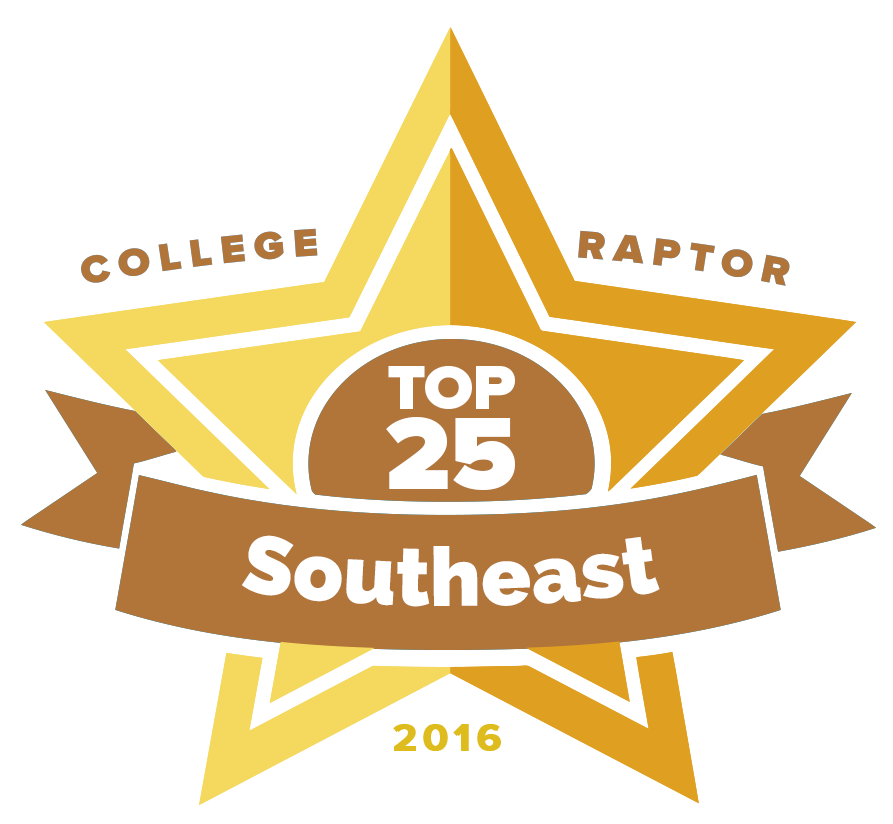 Steeped in much tradition, the Southeast is a place of diverse culture and history.

And, so, too, are the colleges in this region. From the massive public universities that comprise the SEC and its storied sports sagas to new and cutting-edge liberal arts colleges with emphasis on science and discovery–there are great schools all around this area of the country.

For our rankings of the best colleges in the Southeast, we evaluated each school based on a set of criteria that included things like graduation rates, diversity, selectivity, and more.

All told, we came up with 25 that came out on top.

Here are the 25 Southeast college rankings 2016: 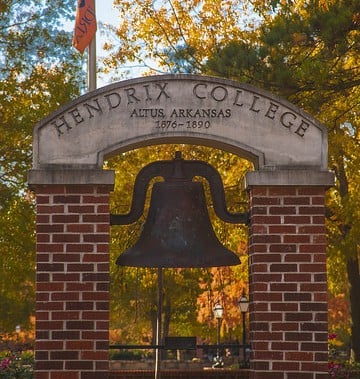 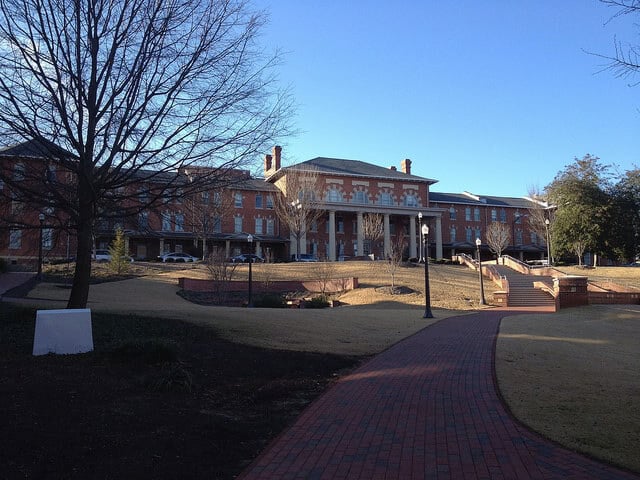 NCSU is the largest college in the Carolinas with an undergraduate enrollment of almost 25,000. The public university is known for its Engineering, Agriculture, and Life Sciences programs and was originally established as the North Carolina College of Agriculture and Mechanic Arts in 1887. It also has a textile college, which enrolls almost 1,000 undergrads in majors related to everything from fashion design to fiber/polymer sciences. 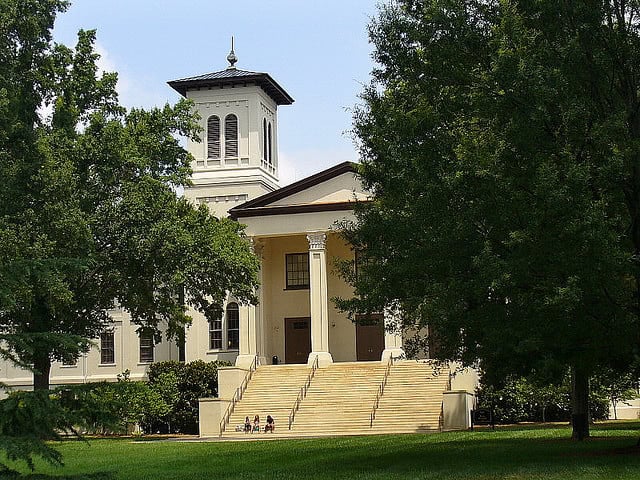 This private liberal arts college offers degrees in a range of majors and enrolls about 1,600 undergraduate students. Wofford is recognized for its emphasis on international learning and study abroad programs, with more than 200 available in 59 different countries. 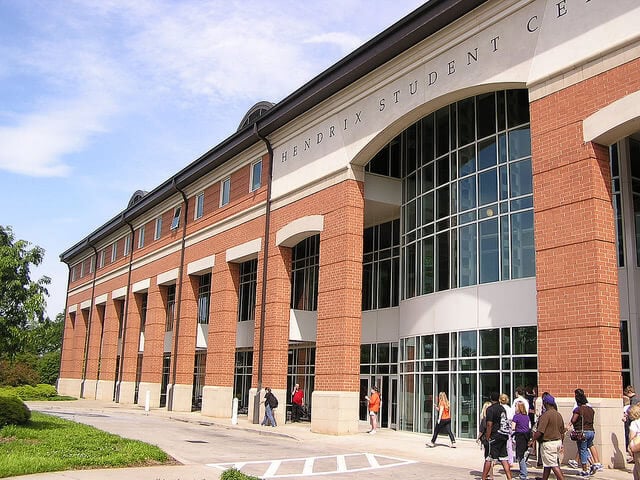 With about 17,000 undergraduate students, Clemson is made up of 6 colleges offering degrees in a range of fields. Some of the most unique offerings at Clemson come from the College of Agriculture, Forestry, and Life Sciences (CAFLS), which offers courses on sustainable farming, food packaging systems, biomedical sciences, and more. The college is also known for participating in extensive automotive and vehicle technology research in conjunction with companies like BMW and Microsoft. 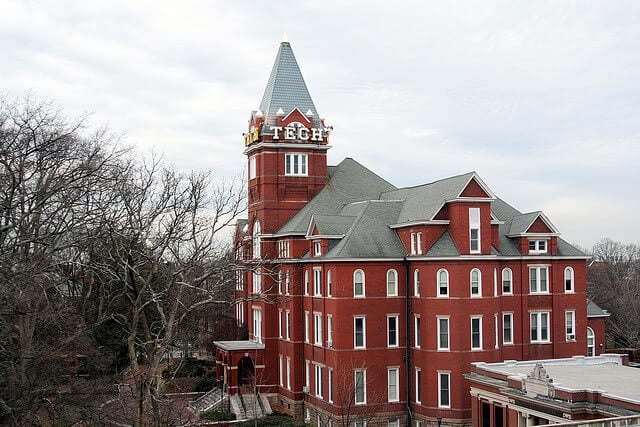 Georgia Tech’s roots date back to the Civil War, as the college was first established as part of the Reconstruction, in an effort to revitalize industry in the South. Since its start as a Mechanical Engineering school, it has grown to nearly 17,000 undergrads and now houses 31 academic departments with majors in engineering, liberal arts, sciences, computing, and more. 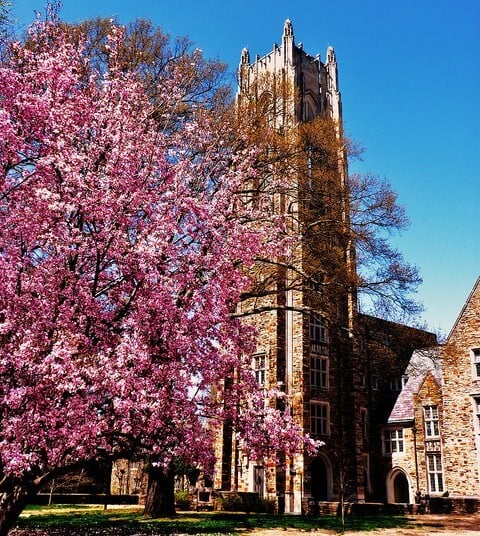 Rhodes College offers students a unique campus experience, noted for its stone and Gothic architecture in an urban setting near the heart of Memphis. Of its 2,000 undergrads, around 30% go on to graduate school, and the college is lauded for its alumni having a 95% acceptance rate at law and business schools, and their medical school acceptance rate being nearly double the national average. 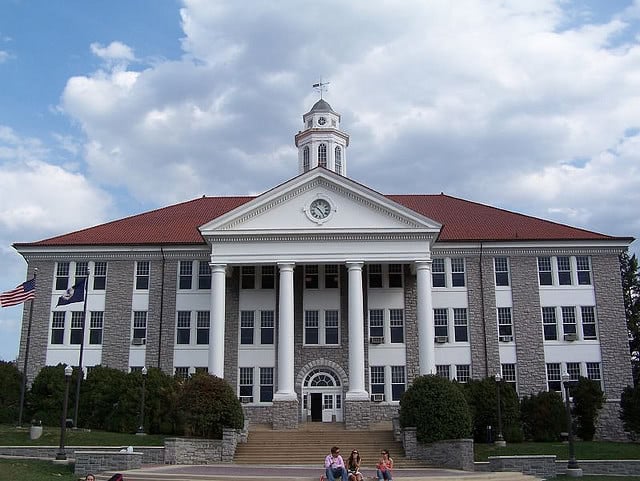 James Madison University is a public research university that spans 720 acres, including over 120 campus buildings. With a 6-year graduation rate of 81%, JMU claims the distinction of having the highest graduation rate of any college in the South. It also has a 92% freshman retention rate, which ranks it among the best in the nation. 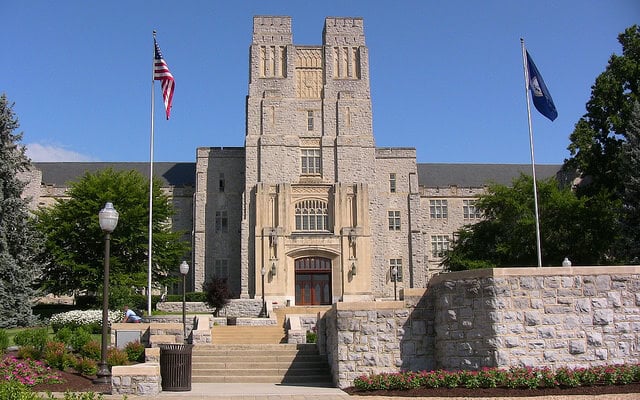 Best known as Virginia Tech, this college in western Virginia enrolls almost 25,000 undergraduate students and is known for its pivotal role in advancing science and technology across a number of fields. Its Bioinformatics Institute is a foremost facility of its kind globally, researching and applying biological data to learn more about infectious diseases, viruses, and pharmaceuticals. 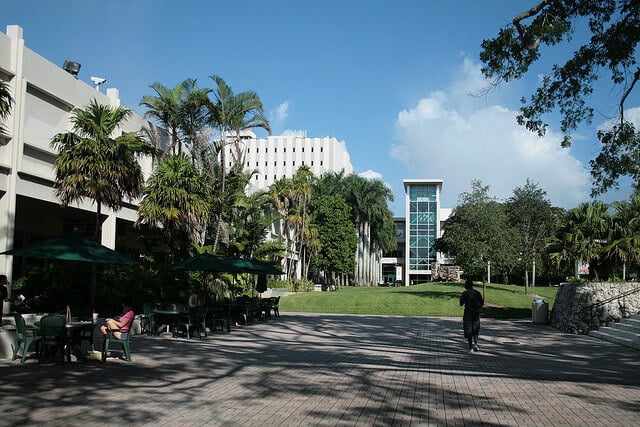 The University of Miami is a private research university located near (but not in) Miami, FL. It’s well-respected as being a very active source of research in many areas. Notably, UM has recently started construction on a 2 million sq ft Life Science Park, which will house a number of departments and research facilities related to the Life Sciences.

Learn more about the University of Miami 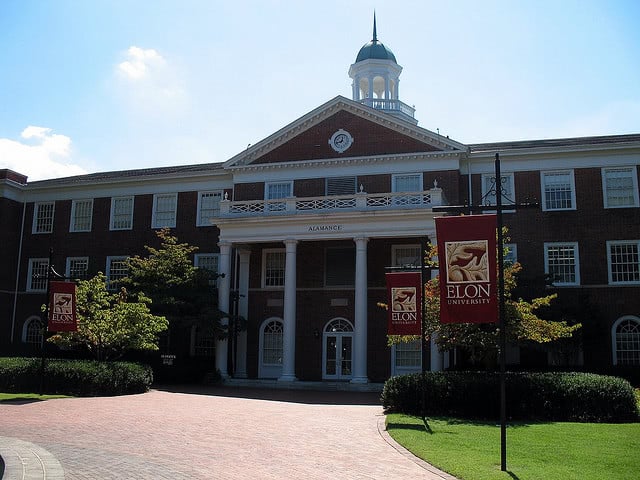 Elon University is a private liberal arts college that enrolls almost 6,000 undergraduate students in rural North Carolina. It is often lauded as one of the “best value” colleges among private colleges nationally, and often cited as having some of the best campus amenities and facilities in the country. 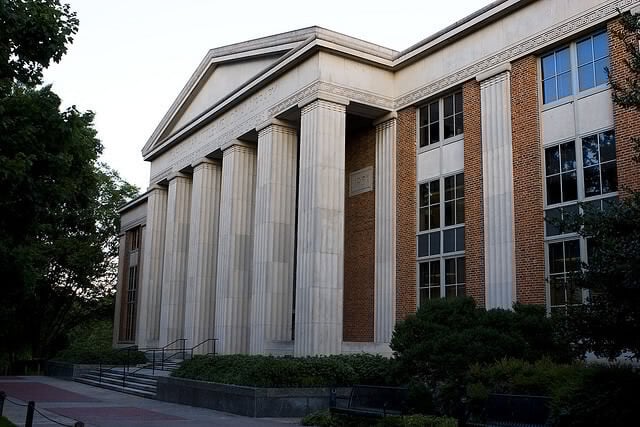 The University of Georgia’s main campus in Athens comprises about 400 buildings and 17 separate schools and colleges dedicated to subjects ranging from Journalism to Ecology. With more than 26,000 undergraduate students, the UGA is the United States’ oldest state-chartered university and is regularly recognized as one of the nation’s best public research universities.

Learn more about the University of Georgia 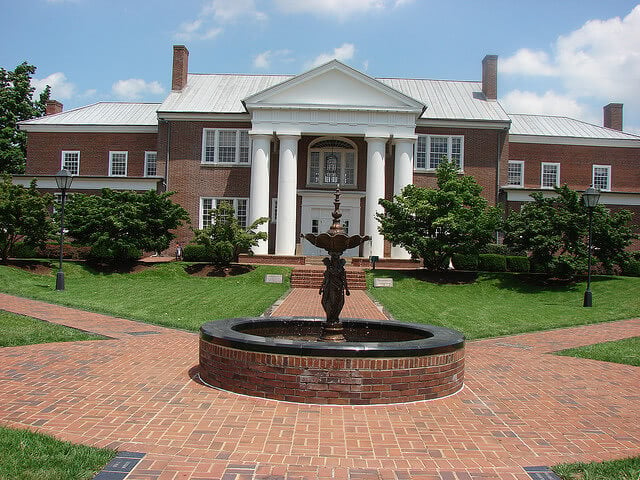 This small, liberal arts college is nestled into central Kentucky. With an undergraduate-only enrollment of about 1,400, the college offers a range of liberal arts degrees, with students most often studying Economics, History, or Biology. 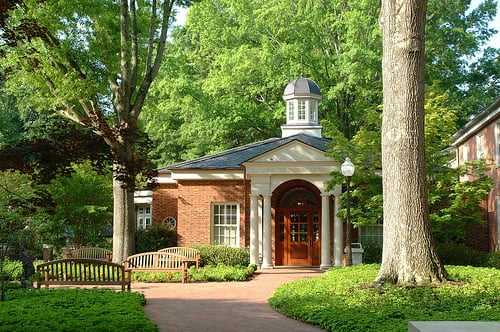 By Green Grass (Own work) [Public domain], via Wikimedia Commons

This private liberal arts college is the oldest in South Carolina. With 2,800 undergraduate students, the college is often recognized as being especially rigorous in its coursework, and for its commitment to sustainability. The campus is also recognized for its beauty and a large, 40-acre lake, which is one of its most notable features. 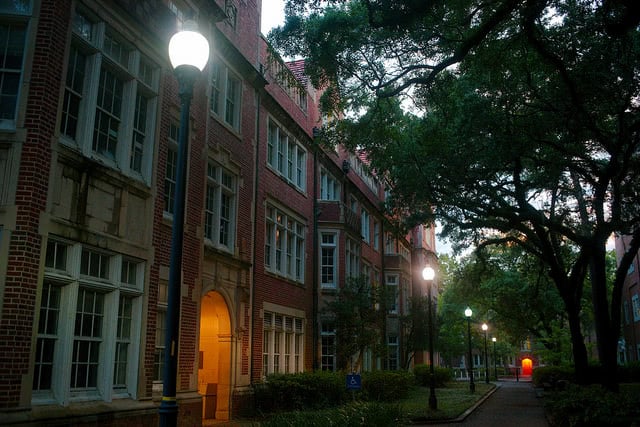 The University of Florida boasts more than 150 research centers and institutes on campus, plus an offering of 16 different academic programs. Among many accolades, this public research university has top-tanked programs in such diverse subjects as Audiology, Analytical Chemistry, and Occupational Therapy.

Learn more about the University of Florida

11. Sewanee-The University of the South 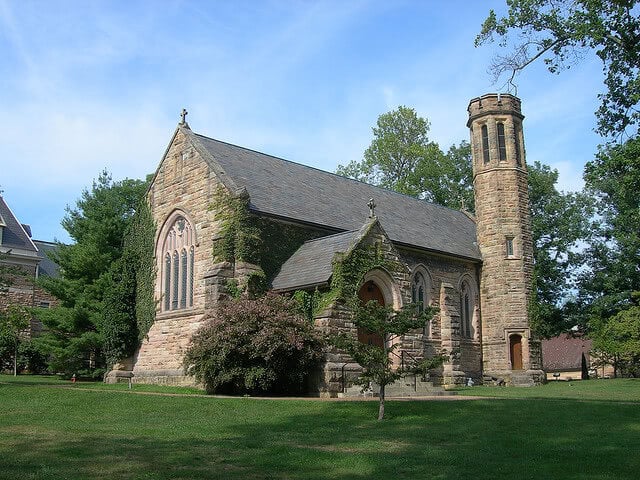 With about 1,600 undergrads, The University of the South has intentionally retained its small enrollment as a way to maintain academic excellence and personalized campus feel. Despite being small in number, Sewanee has a large reputation for producing some of the nation’s best grads and is particularly noteworthy for their pre-medicine, pre-law, pre-business, and pre-nursing programs.

Learn more about Sewanee-The University of the South 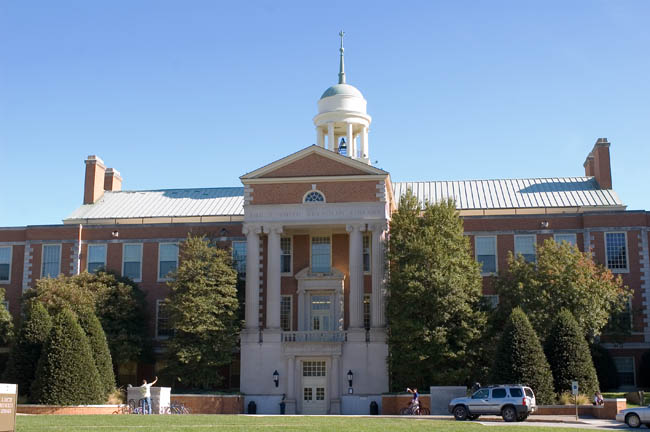 By Jijithecat at en.wikipedia [Public domain], from Wikimedia Commons

Wake Forest is one of the nation’s preeminent private research universities with an endowment of more than $1 billion. It is especially known for its Biological Sciences programs and is a leader in research related to nanotechnology and molecular materials/engineering. 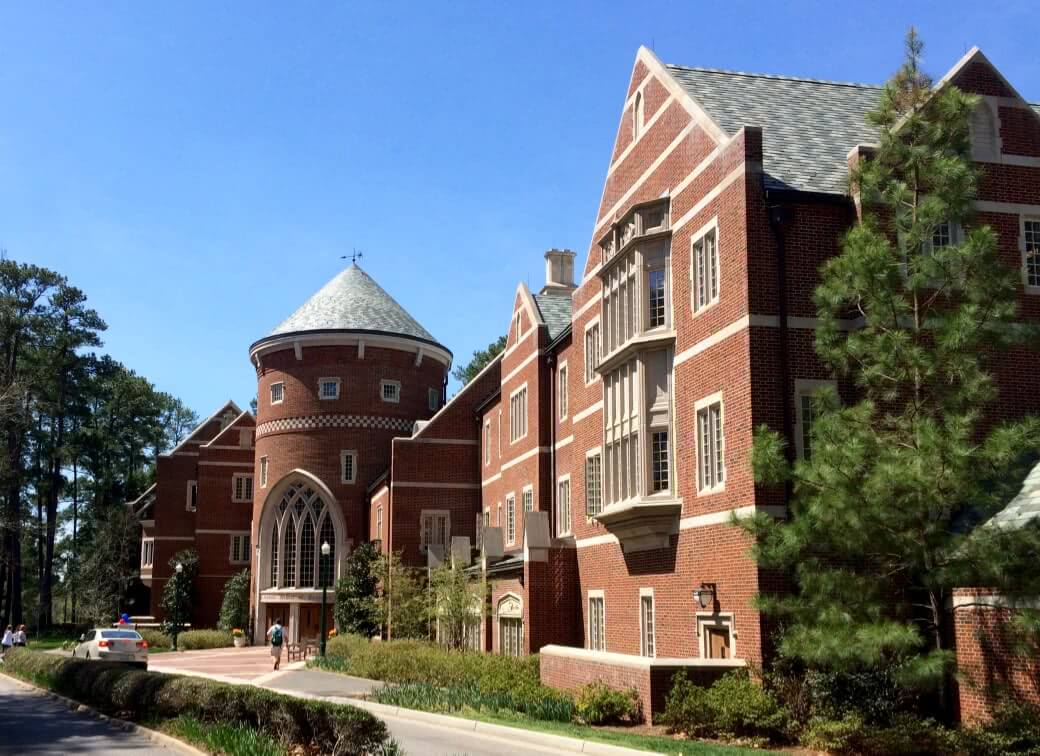 This private liberal arts college is noted for its Business and Leadership programs. It’s also one of the few universities in the nation which practice “need-blind” admissions, not considering a student’s financial need when deciding whether to accept or deny their application.

Learn more about the University of Richmond 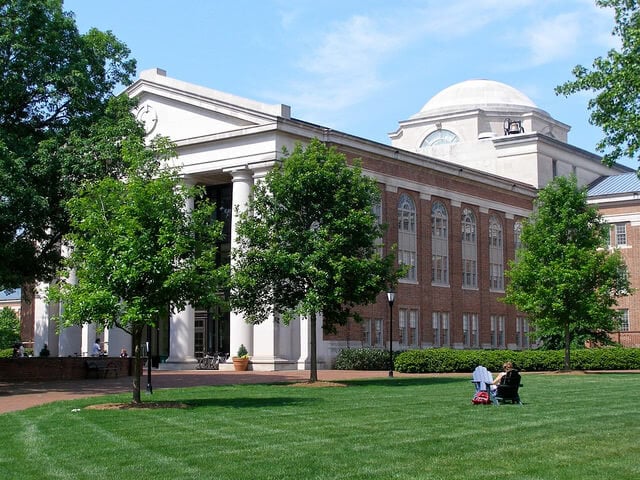 This private liberal arts college is settled in a lakeside college town that shares its name. Davidson College enrolls more than 1,700 undergrads and boasts a unique College Farm area, which provides fresh, naturally-grown produce used in the dining facilities. 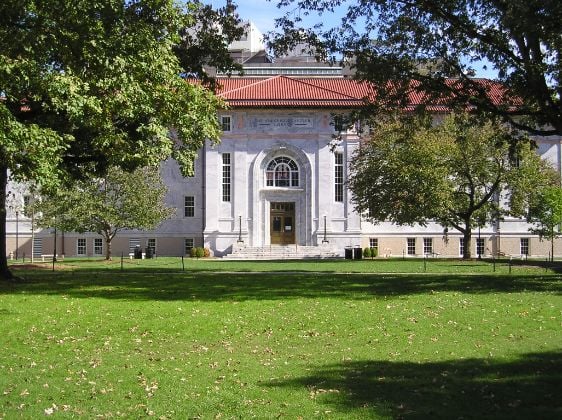 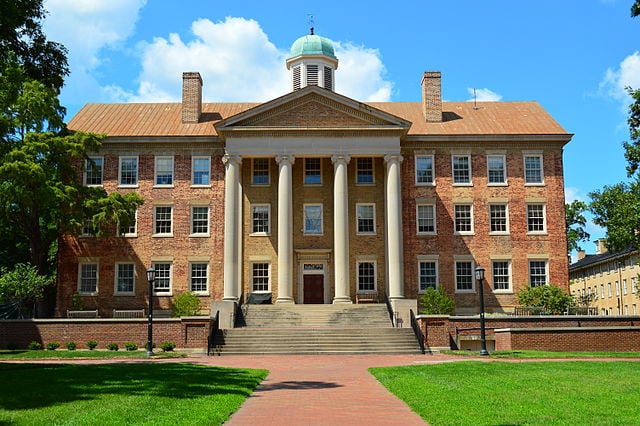 5. College of William and Mary 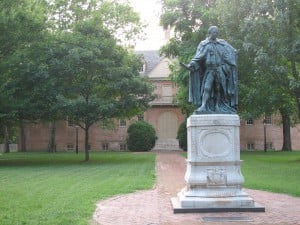 W&M is a public research university that enrolls more than 6,200 undergraduate students. It’s recognized as a so-called “public Ivy,” offering an education comparable to the Ivy League at a public institution. Notable alumni include Presidents Thomas Jefferson, James Monroe, and John Tyler.

Among one of the most-respected, rigorous, and selective private liberal arts colleges in the country, Washington and Lee University is home to approximately 2,000 undergrad students. Business Management, Economics, and Accounting are the three most popular majors. 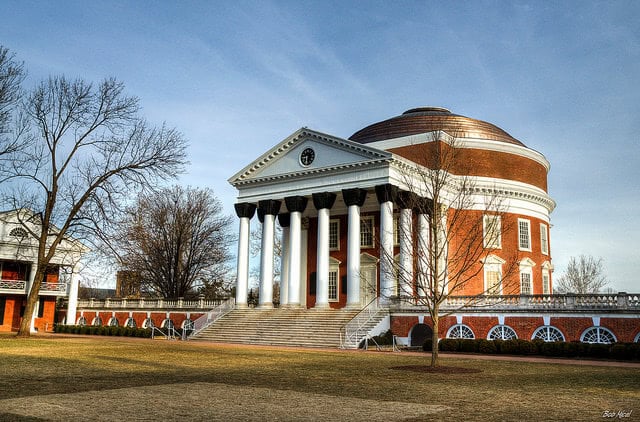 With 16,000 undergrads, UVA is recognized for having the highest first-year retention rate of any college in the southeastern U.S. The public research university is located near the Appalachian Mountains and offers many majors and programs, including Business, Liberal Studies, and Biology, the three most popular among students. 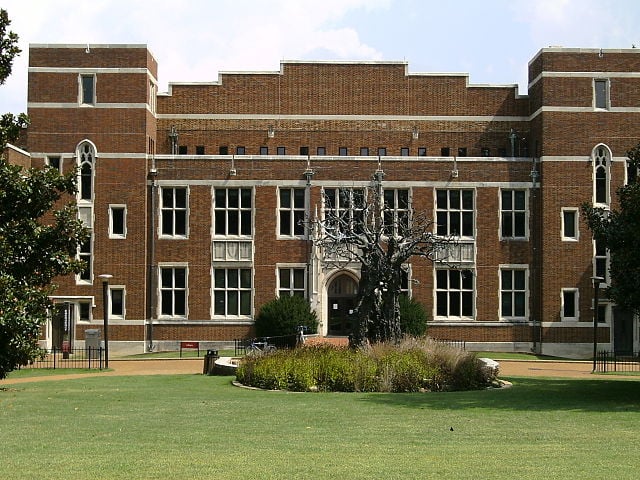 Comprising 4 schools (Arts and Science, Engineering, Education and Human Development, and Music), Vanderbilt enrolls nearly 7,000 undergrads and offers more than 70 academic majors. The private research university is located in one of the nation’s most vibrant cities, Nashville, but is also noted for its abundance of green space despite the urban setting.

Duke University enrolls about 6,500 undergraduates and offers 46 art and science majors, plus 4 engineering majors, and the IDEAS program, which allows students to construct their own custom engineering major–one of the only such programs in the country. Its reputation for education excellence extends to nearly every program offered at the college, and its Durham campus extends over more than 8,500 acres and contains more than 250 campus buildings, making it among the largest college campuses in the country.