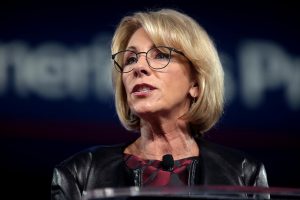 On February 7, 2017, the US Senate made history. With the vote deadlocked at 50-50, Vice President Mike Pence cast his tie-breaking vote. He confirmed Betsy DeVos as Secretary of Education via a 51-50 vote. A vice president broke a tie vote confirming a cabinet position for the first time in US history. This demonstrates both the immense importance of the Secretary of Education, as well as the loud discussion surrounding Secretary DeVos’s plans for the department.

Secretary DeVos has attracted both controversy and support for her views. She is a longtime proponent of charter schools and voucher programs. Both favor private schools and the Republican Party generally supports that. The Democratic Party, which holds a minority of seats in both the House and Senate, has expressed concern that DeVos’s plans favor wealthier families. Secretary DeVos has responded to criticism by reaffirming her commitment to all studentss. She pointed to her efforts to reform the student loan program as an example.

In May, Secretary Betsy DeVos committed to a major change to the federal student loan system, citing chaos and confusion in the program. At the time Secretary DeVos came into her position, the government contracted nine companies to manage student loans. In the footsteps of an Obama Administration plan to streamline the process, DeVos posited an “exclusive contract” to one company to somewhat remove the complexity and completely remove the involvement of other companies. Secretary DeVos claimed that taxpayers would eventually benefit from this change by saving millions of dollars. This elimination of eight companies is in lockstep with both the message of the Trump Administration, which has promised to eliminate unnecessary spending and programs, and the prior Obama Administration, which committed to making the student loan process easier.

While, at first glance, contracting loans to one company exclusively might seem like a good idea for its simplicity. However, there were drawbacks to the plan. Democrats were concerned that the elimination of the other nine companies would not give more power to the people. Instead, it would just give more power to the one company responsible for loans. Republicans were hesitant to eliminate market competition among the student loan contractors. With bipartisan resistance, Betsy DeVos announced that the “streamlining” would be nixed, and a new plan would be formulated.

On the first of August, the Department of Education announced that, instead of a single contracted company, a single online platform would be used for all families to use for the loan process. The head of Federal Student Aid (FSA), Dr. A. Wayne Johnson, said of the new system: “When FSA customers transition to the new processing and servicing environment in 2019, they will find a customer support system that is as capable as any in the private sector.”

The change in plans was met with bipartisan approval. Several praised the Department of Education’s willingness to change their plans after criticism from legislators and the public. The effects of the new platform won’t be seen until its implementation in 2019. However, Secretary DeVos hopes it will serve as a beacon to modernize the system. “By starting afresh and pursuing a truly modern loan servicing environment, we have a chance to turn what was a good plan into a great one.”