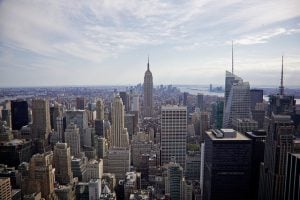 Last week, at a news conference in Albany, New York Governor Andrew M. Cuomo announced the signing of a bill that will bring free tuition at four-year state universities and colleges to some Empire State families. Backed by prominent politicians, including former Secretary of State Hillary Clinton, Cuomo touted the program as a stepping stone for other states to follow in the future.

The program is officially titled the Excelsior Scholarship, after the state’s Latin motto, translated as “ever upward”. New York families who earn less than $100,000 a year are eligible to receive free tuition from the state. New York students will then be able to attend any public university in the prominent SUNY (State University of New York) system free of charge. That also includes community colleges. Students will receive full payment for their tuition, minus any additional funds from grants or scholarships they receive. In a compromise with the bill’s opponents, the initial income threshold raised to $125,000 in 2019.

What the program does

Cuomo raised the idea of free college at a January summit with Sen. Bernie Sanders (I-VT), where the two discussed the mounting costs of tuition: “This society should say, ‘We’re going to pay for college because you need college to be successful,’… [and] New York State is going to do something about it”. Last week, the program was made official, one of the first of its kind in the nation. Other parts of the country have programs to provide tuition money. For example, San Francisco gives its resident’s free community college tuition. However, the Excelsior Scholarship program pioneers the idea on a large scale.

The Excelsior Scholarship will be rolled out slowly. Hopefully, that works out any kinks in its complexities. Ideally, Cuomo said, the plan would begin to be offered in the fall of 2017. Other provisions will be added until the program reaches its full status by 2020. Current estimates show that nearly 200,000 New York students would be eligible to attend college for free under the program by that date.

Starting a trend of free tuition

The plan was germinated in similar proposals—albeit on a federal scale—in the platforms of Secretary Clinton and Senator Sanders during the 2016 Democratic primary. Other states, including Rhode Island and Minnesota, are currently considering related proposals on the floors of their state legislature. To this end, Cuomo hopes that the Excelsior Scholarship will start a trend: “We are restoring the promise of the American Dream for the next generation and forging a bold path forward of access and opportunity for the rest of the nation to follow”. Sanders echoed this sentiment earlier in the year when the plan was in its initial stages. He predicted that “…if New York State does it this year, mark my words, state after state will follow.”

The plan has not been without detractors on both sides of the political aisle. Some progressives, such as free-college proponent, have derided the scholarship as not going far enough. It does not cover the additional fees of living on campus like room and board. On the other hand, conservatives feel it goes too far. The plan is sure to be a lightning rod for future political discussion until the full effects of the rollout are seen.