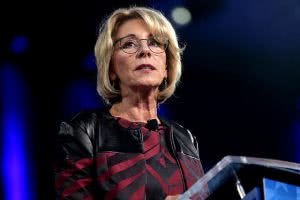 12/19/2018 Nobody said that the government, federal student loans, student debt, and repayment plans were simple concepts. They interweave in often frustratingly complicated ways. More often than not, loans leave borrowers scratching their heads. When it comes time to their student loans, people are often confused and do not know how to even start repaying. However, this past year the Education Department had plans to reform the federal student loan repayment system and make it much simpler. Unfortunately, on Friday, December 14th, it was announced that those proposed plans fell through.

The proposed reform plan featured a new technology system that would simplify and streamline the federal student loan repayment process. This system would have had a new website, detailing repayment options to student borrowers. The changes would also include a better way to allow them to see and manage their accounts.

All sides generally dislike the current repayment system. The system is complicated and frustrating to use. Mentioning the universal pain point, Secretary of Education Betsy DeVos said, “Repaying a student loan should not be complicated and it should not be frustrating. You can pay your car loan on your phone and manage your mortgage on an app. A student loan should be just as easy to handle.”

With the new system, 35 million student borrowers would have enjoyed an updated and standardized process when it came to making and managing loan payments.

The Wrench in the Plan

So what exactly went wrong? Although the federal government is the largest lender of student loans, they rely on outside servicers to help with the logistics of repayments. There are 8 servicers, and they are the ones who send out the bills and collect the repayments.

7 of the servicers, including Navient, were far from happy with the changes. In fact, they filed a lawsuit against the Education Department. In their lawsuit, they cited contracting errors and unfair last-minute changes.

The lawsuit threw a wrench in the overhaul plan by suddenly adding a tight deadline. In the end, the Education Department announced that they would not be moving forward with their proposed changes. They would instead rely on the old system for now.

For the foreseeable future, the current loan repayment system will remain in place. As frustrating as that is for student loan borrowers, there is still some hope. The Education Department still wants to implement all these proposed changes. In fact, the Education Department will make some improvements and changes over the course of the next year. Until the outside servicers and the federal government both agree upon the proposed contracts, the promised overhaul may be stuck in the weeds for the next few years.

Does your student loan plan not work for you anymore? Check this out!