Home > Getting In > Questions & Answers > What Is An Average GPA in America?

What Is An Average GPA in America? 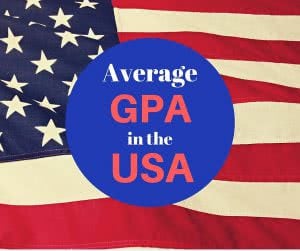 A student’s grade point average is the culmination of their grades and hard work in their high school classes. What’s more, the GPA is an important element in a student’s college application. With so much hype and conversations around GPA, you may be wondering what the average GPA is in America.

According to a study done in 2017 by Inside Higher Ed, the high school students had a 3.38 GPA on average. Keep in mind though, GPAs have been steadily on the rise for the last couple of decades. In 2009, according to NCES, that average GPA was 3.0 (though the average GPA in just core classes was 2.79).

However, you can’t just look at that number by itself.

Did you know it’s possible to earn a GPA higher than 4.0? AP coursework is often weighted to be “worth” more since the classes are more challenging. That challenge is known as academic rigor.

Core classes, on the other hand, are considered standard. This is because every student has to take them at one point or another.

It depends. A college might find that B impressive given the rigor, but a B might bring down your GPA a little. GPA isn’t the only thing a college will look at.

Your GPA is important when applying to college and you should strive to get a high score. However, it is only one of many factors that colleges take into consideration when assessing applications. Other important elements include:

So don’t be disheartened if your GPA is below the national average. You’re more than just a number—colleges know that. They’re interested in accepting a student, after all, not just a stat.

The Average You Should Pay Attention To

America’s average GPA may be interesting to compare your own grades to, but there’s a far more important comparison to make—the average test scores of students accepted into the colleges on your list.

To see if a college is a good academic fit for you, check out their page on College Raptor! In the Admissions tab, you’ll be able to see the average ACT and SAT scores of incoming freshmen that were accepted. This is a much better indicator of if that school is an academic match for you. (If yours is below average, it’s still worth applying, but check out some of the other schools on your list too).