Pros and Cons of Using the Universal College Application

Pro: The Process Is More Streamlined

The interface is faster than the Common Application. This could be because the Universal College Application (UCA) is 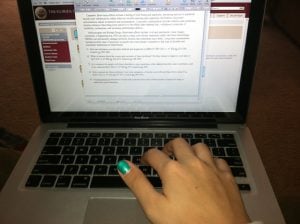 newer: It was just released in 2007. There is also an auto-save feature. Should anything happen while you’re in the middle of something, you won’t have to go back and redo it.

Con: There Are Only 44 Schools That Accept Universal College Application

Compared to the Common App’s over 500, that’s not much. In addition, most of the 44 schools also accept the Common App. Only 8 are UCA-exclusive.

Pro: There’s Only One Open-Ended Essay Required By UCA

Common App used to have this as well, but they’ve changed that to five prompts that you choose from. UCA gives you the opportunity to write about whatever you want. Some of the schools you are applying to might have supplemental questions they want you to answer, but that’s true for all application programs.

Con: Letters of Recommendation Are Not Required Components

This might not affect you if you don’t plan to apply to schools that require letters of recommendation. However, you have to remember to send out the requests if it is. And since the UCA isn’t as common yet, your teachers might not have recommender accounts. You’ll have to give them time to set that up as well as write your letters.

Pro: You Can Edit Your Essay After Submission

Sometimes we miss things in our essays when we’re stressed. The UCA allows you to revise your essay after you’ve submitted the application. Of course, there’s a limited time window on when this is useful: A few days after is probably good. But wait a month or two? It’s likely that your essay has already been read, especially if it’s after the deadline.

Con: You Might End Up Filling Out Multiple Applications

If you complete the UCA and then add schools that don’t accept it to your list, you’re probably going to end up filling out the Common App as well.

If you have an online portfolio, for example, this is really useful. Videos and newspaper articles can also be linked to. Try to keep it relevant to your application, and don’t overdo it.