Home > Getting In > ACT & SAT > What Did the First ACT Test Look Like? 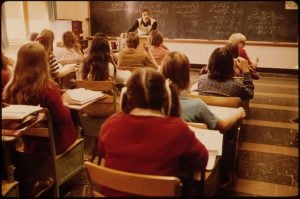 As far as standardized tests go, nothing much has changed about the ACT since its conception. The test has always been composed of four sections. The sections when the test first rolled out in 1959 were English, mathematics, social studies, and natural science. The ACT has always been an achievement test—a study of what you know and understand—versus the SAT’s more reasoning-focused test. Each section was scored 0-36. The composite score of the four sections was gathered from the average score of the sections.

The first tests were scored with computers.

Ted McCarrel and E.F. Lindquist scored these first tests with computers. The computers used optical mark recognition and could score thousands of tests in an hour. The mathematics section focused primarily on algebra questions (which were the predominant math courses at the high school level at the time). Social studies looked at specific history questions, particularly concerning U.S. history. Natural science tested knowledge of the sciences (not just whether you can read a graph or not. You had to have scientific knowledge). English has remained much the same, although it had a larger focus on grammar in the early days of the test. Each section was taken in 45 minutes, giving the test a total time of 3 hours.

The ACT has remained relatively the same.

In the results booklets that contained scores, students were told their results could “help make decisions that will affect many aspects of your future.” This must have been nerve-wracking, especially since you could not retake the ACT as you can now! Lindquist had designed it as a placement test for college. It was also used to see which areas of study a student needed to improve upon. Though some changes have been made (most notably in 1989, when Science and Reading took the places of natural science and social studies), it is still very much the same.