This summit brought together over 686 brilliant entrepreneurs from 170 countries to share their passion and develop ways to spread the lively spirit of entrepreneurship. President Barack Obama was a notable speaker at the summit and expressed one of the purposes of the summit is, “This summit’s job is to make sure we are putting more tools, more resources into the hands of these folks who are changing the world.”

The entrepreneurial spirit is not only good for stimulating the mind but the economy. The need for innovation is strong and these schools recognize this. Their entrepreneur programs have been recognized by the Princeton Review as being the top of their class for producing forward-thinking, competent, and intelligent entrepreneurs. Below is a list of great colleges involved with entrepreneurship. 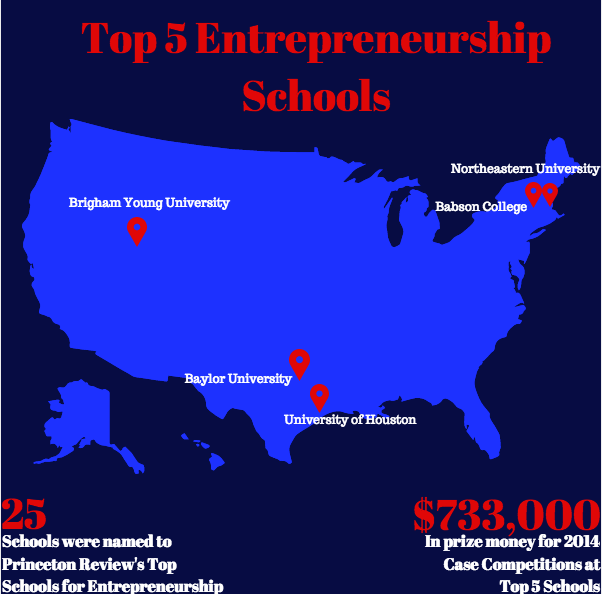 Babson College’s Arthur M. Blank (co-founder of Home Depot) Entrepreneurship Center ranked the highest out of all schools in the U.S. for promoting entrepreneurship. They offer 55 courses relating to entrepreneurship and the faculty that teach there either started or ran a successful business. In 2014, their case competition awarded $75,000 in cash prizes. The center’s graduates have launched 118 businesses. One of the most prestigious components of the program is the Summer Venture Program. Fifteen teams of the most promising students are selected to participate in a 10-week intensive program where they are provided with workspace, advisors, and mentors to help guide them through developing their business.

Student Success: Michael Bastain designs luxury menswear in America. He graduated from Babson in 1987 and began his career as an assistant buyer at Abraham & Strauss. His talent was evident and became the Fashion Director for Bergdorf Goodman in 2000. He later decided he wanted to start his own fashion line. In his first year, he became CFDA’s Newcomer Menswear Designer of the Year.

Rollins Center for Entrepreneurship and Technology boasts 32 undergraduate courses related to entrepreneurship and the graduates’ 256 companies have raised an impressive amount of funding totalling over $150 million. The case competition in 2014 awarded over $300,000 in cash prizes.

Student Success: David Royce was named the Entrepreneur of the Year by the Rollins Center for Entrepreneurship and Technology for his successful, environmentally conscious pest control companies. One of his companies, Alterra, sold to Terminix in November 2015. Royce and his businesses have received numerous awards, but one of the most notable is being the recipient of the Ernst & Young National Entrepreneur of the Year award in 2015.

The Wolff Center for Entrepreneurship has 31 classes offered for young entrepreneurs to equip them with the skills needed to successfully launch and run their own businesses. In the last five years, Wolff Center graduates have started 66 businesses and raised a grand total of over $7 million in funding. Their 2014 business competition totaled $8,000 in prize money. Their elite faculty totals 280 combined years of experience in the business world.

Student Success: Entrepreneur senior, Amanda Moya, was recognized by the Texas Business Hall of Fame to receive a $15,000 scholarship. Moya began her first business venture at the age of 15. She started an in-home tutoring program with her mother. The program became so successful during the first year, they leased a building. The business was named Aspire Advancement Center.

The John F. Baugh Center for Entrepreneurship offers 29 courses to prepare their students for successful careers. They are doing a pretty good job, too, considering the fact that their graduates have raised over $2 million in funding for their startups. Their talented entrepreneurs also received $100,000 in cash prizes in the 2014 case competition.

Student Success: An entrepreneur by heart, Chip Gaines, from the popular HGTV show Fixer Upper graduated with his BBA from Baylor in 1998. Gaines began his first business, Wash n’ Fold, while a senior at Baylor. From there, he and his wife, fellow Baylor graduate Joanna Grimes, started their successful Magnolia Homes business which led to them filming houses and picking up a number 1 rating for their TV show.

The Northeastern University Center for Entrepreneurship Education aims to educate, incubate, and launch their students by offering 35 courses and offering $250,000 in cash prizes for their 2014 case competition. Their sharp students have launched over 400 companies and collectively raised over $12 million in funding.

Student Success: The Northeastern University Entrepreneurship Club’s Husky Startup Challenge is a 7-week accelerator program that results in final pitches and a selected winner. The winner chosen was Stash. Stash was created to take part in the up and coming shared economy. The premise is sharing your commodity you do not need with someone who does. Stash markets themselves to students with inadequate storage space. Have some extra room in your closet? Use Stash and rent it out.

Are you a budding entrepreneur interested in one of these schools? Use College Raptor’s match tool to see what your admission odds are, and to see what kind of financial aid you could receive. 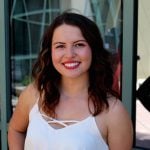