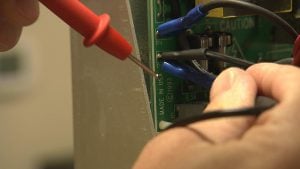 In these times of economic uncertainty, students nationwide have been struggling to find a career that both matches their passion and offers a realistic chance at finding a job upon graduation. It is well documented that, over the past five or so years, one of the most financially lucrative college majors is the discipline of electrical engineering. According to a recent study, electrical engineering is the third-highest paying college major when sorted by median starting salary, with a majority of engineers making upwards of $60,000 upon graduation. Additionally, the field has one of the highest mid-career average salaries of any discipline, over $100,000.

Naturally, the reaction of most students to these figures would be interest, but restraint, because it may seem impossible that such a financially rewarding career is possible when so many others have the same information available. Never fear, electrical engineers; some just don’t have the time to do the digging necessary to find programs to separate themselves from their fellow students when pursuing this career. Luckily, we’ve started your work for you. Here’s a partial list of scholarships to look into that will help you spark your career in electrical engineering:

Virginia Polytechnic Institute and State Univeristy, commonly known, almost always, as Virginia Tech, is considered to be one of the top schools in the nation for budding engineers. Located in the small town of Blacksburg, Virginia Tech has seen many of the world’s foremost authorities on technology walk its halls, including architects, CEOs, inventors, and economists. VT is a selective school, with an acceptance rate of 55%, lower than the national average. However, when it comes to their flagship engineering program, the school takes only the best. One of the ways to make yourself known to the engineering department before entering the halls of VT is to apply for one of their many Scholarships for Prospective Students.

Offered in many disciplines, the electrical engineering variety of these contests provide a great opportunity to discern what the university is looking for, as well as whether or not your high school transcript can net you financial assistance. Some scholarships have a rolling acceptance, while others are more time-constrained. With the reputation of VT as a top school for electrical engineers, getting out ahead with a scholarship application is a strategy recommended to all who are serious about their studies.

The Association for Iron & Steel Technology, or AIST, is an international alliance of engineers devoted to the technology of iron and steel. AIST considers themselves to be among the foremost engineering technology organizations in the world, and devotes much of their time and energy to drawing engineering students into their fold through internship and scholarship opportunities.

Open to students majoring in either metallurgy, materials science, electrical, chemical, industrial, environmental, or computer science engineering, the Steel Scholarships, as they are known, offer up to $3,000 in rewards for commitment to the organization’s mission. All college students in one of these disciplines are encouraged to apply, as long as their GPA is a minimum of 2.5. AIST looks for students who have a strong interest and passion in expanding the horizons of the technology they study, and ask applicants to submit a resumé, academic trasncript, and an essay detailing their interest in engineering and technology.

It is no secret that the number one goal of most organizations that offer scholarships is to garner interest in their field among students who are on the fence about their career paths. The Insitute of Electrical and Electronics Engineers (IEEE) Power and Energy Society makes this abundantly clear in their slogan, proudly displayed on the banner of their website: “Preparing the Next Generation of Power & Energy Engineers.” To help achieve this goal and reaffirm their genuine commitment to the future of engineering, PES offers  an undergraduate scholarship in their name to assist students in getting through tuition fees.

The IEEE PES Scholarship Initiative counts among its future goals “changing the way we generate and utilize power,” a broader theme of the organization as a whole. To be eligible, one must be a declared electrical engineering major with a sustained high GPA that is committed to the field of power and energy and “eager to explore the field through career experiences.” The scholarship’s funds are distributed over three calendar years, with the winner receiving $2,000 for the first year, another $2,000 for the second year, and $3,000 for the third year. I’ll do the math for you: this generous scholarship totals at $7,000, a huge help to students who often struggle with debt.

The study of science, technology, engineering and math, four popular and well-paying fields, are often lumped together under the acronymic umbrella “STEM.” Throughout the past decade, funding for STEM-related programs has skyrocketed, especially since the downturn of the economy. STEM jobs are often portrayed as stable and ever-present due to their necessity in keeping society functioning, and undecided students are often encouraged to join one of the four majors if they are interested. The Pacific Gas & Electric Company (PG&E), based in San Francisco, California, has made it their mission over the past several years to expand interest in STEM programs through their scholarship incentives.

Open to high school seniors and college students who wish to major in a STEM discipline, the Better Together Scholarship Program seeks out students in need of financial assistance who dovetail community leadership and academic excellence. In order to be eligible, applicants must live in an area served by PG&E, which covers a majority of Northern California. The scholarship is not limited to electrical engineers, but given that PG&E employs many of those in the field, it is probably an advantage. PG&E takes their role as both a company and an organization seriously, expanding the horizons of the youth, reaching out, hoping to push more students towards the field they serve.

Interested in Electrical Engineering? Check out College Raptor’s free match tool to discover schools that offer the major and that are good matches for you!