Home > Getting In > Questions & Answers > Should I Apply Early Decision to College?

Should I Apply Early Decision to College?

Prepared students with a single first choice college may consider applying early decision. Early decision is binding–meaning if you apply and are accepted early decision to a college, you are expected to go there, with almost no exception.

There are a lot of reasons students apply this way. Many believe it’s easier to be accepted early decision than regular decision. Others just want the college application process over with as quickly as possible.

But the choice shouldn’t be taken lightly. Keep these things in mind as you decide if you’ll apply early.

Applying early decision may increase your chances of being accepted

There are some colleges where applying early decision has an impact on the odds of acceptance. 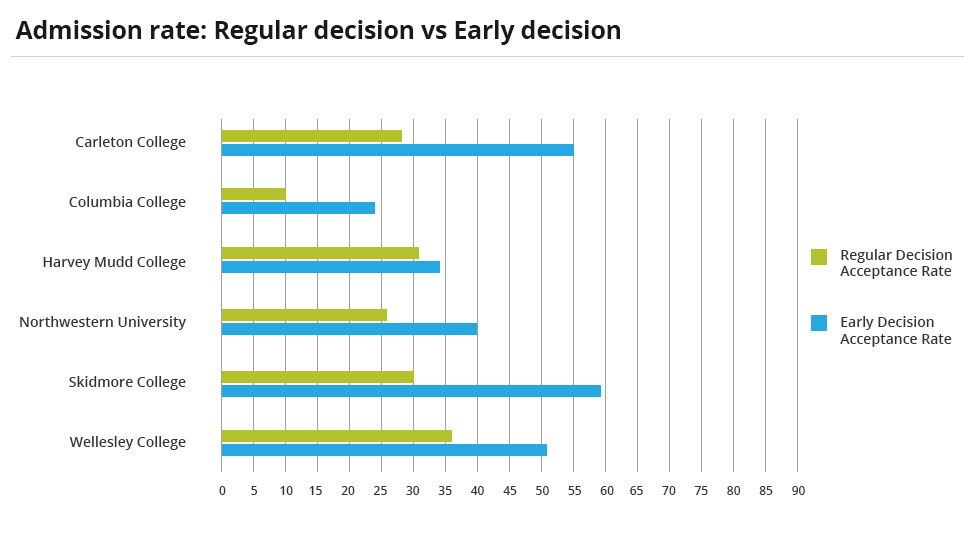 Many colleges recognize that their admission rate is higher for students that apply early decision.

In fact, colleges (including Columbia) admit that the early acceptance rate is greater than the overall acceptance rate. However, they caution that the applicant pool is generally stronger and more competitive–and that athletes and legacy students (students with close relatives who graduated from the same college) are more likely to apply, and be accepted, early decision. This skews the rates.

Not all colleges have higher early decision admit rates, so don’t count on being accepted just because you apply early. However, strong applicants may get a boost from showing their commitment to a college by applying early decision.

If applying early decision sounds appealing to you just because you want to receive your letter as soon as possible, consider looking into early action instead. These programs are non-binding, and notification takes place at the same time (usually mid-December).

If you submit all your applications before carefully considering your options, you may end up going to a college that no longer sounds appealing to you. Only apply early decision after thoughtful reflection of all your options.

That being said, if you’re sure about where you’d like to go to college, getting your acceptance letter early can have its advantages. You’ll be one of the first to submit your housing request and receive your financial aid package.

Think about your finances before you apply early decision

Some colleges allow students to apply for financial aid before the FAFSA opens January 1st using the CSS/PROFILE or other forms. But in most cases, students will have to wait until they can submit the FAFSA before they know what their financial aid package will look like. By then, the time to submit regular decision applications to other colleges is running out.

Some counselors warn students in need of financial aid against applying early decision.

Backing out of an early decision agreement has real consequences

If you break an early decision agreement, the contract could prevent you from attending other colleges in the fall. Some colleges rescind their offers if they find out you sent in an application after another college already accepted you via early decision–and don’t expect an invite back to the college you turned down. The only way you may be excused from the agreement is for financial reasons. No college is going to force you to take on a financial burden you can’t handle.

If you change your mind before receiving a decision, contact the admissions office at the school as soon as possible. They can switch your application from early decision to regular decision.