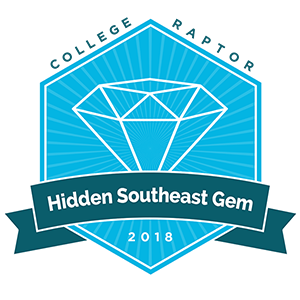 For the purposes of this list, we’ve included the following states in the southeast: AR, LA, AL, MS, FL, GA, TN, SC, NC, VA, and KY.

The most popular majors on Samford’s campus are Pharmacy, Registered Nursing, Journalism, Finance, and Psychology. The university boasts a first year retention rate of 89%. Students cheer on the Bulldogs while wearing the school colors–red and blue. 65% of the students on campus are women.

Birmingham Southern offers more than just 30 majors, students also benefit from their Explorations curriculum and intensive January study term. The most popular majors include Business, Biology, and Psychology and the Alabama Beta chapter of Phi Beta Kappa is located here. You will also find the Southern Environmental Center on the BSC campus which develops model partnerships in areas involving urban revitalization among others.

University of Alabama in Huntsville

As a top tier public research university, UAH is one of three members in the Alabama state system. Top fields of study include majors in engineering and science given Huntsville’s vibrant technology-based economy (home to the U.S. Space & Rocket Center). Its Propulsion Research Center provides research support to NASA, the Department of Defense, and the Department of Energy.

Hendrix College has an ancient Greek phrase as its school motto: εἰς ἄνδρα τέλειον–Unto the whole person. The college is located 30 miles out from Little Rock. Incoming freshmen score an average of 26–32 on the ACT and an average of 1170–1410 on the SAT. Hendrix has an acceptance rate of 77%.

JBU is a conservative Christian university located in northwest Arkansas. Offering 47 undergraduate majors, the most popular are Business, Family and Human Services, and Graphic Design. The JBU Golden Eagles compete in NAIA athletics as they sport their school colors of royal blue and gold.

While Searcy, AR is Harding’s home campus, it has several other campuses internationally. Required daily chapel occurs around course schedules of their over 100 areas of study. Mission trips and study abroad programs take students to every continent to expand global literacy. A popular event is the annual Spring Sing which features performances by the University’s social clubs.

Ringling College of Art and Design

PBA is a faith-based institution with a Christian worldview and has over 26 denominations represented. Campus is located only one mile from the Atlantic Ocean. One of the school’s most distinguishing features is the Frederick M. Supper Honors Program which is separated into six major “World of” classes. PBA operates five centers of excellence which provide opportunities for students to gain expertise in their given field.

Of the 4,836 applications sent in last year, Mercer accepted 3,336 of them–or about 69%. 60% of all the students on campus are women. Their school colors are orange and black, which students wear to cheer on the Mercer Bears at sporting events. There is a 13:1 student-to-faculty ratio.

As a liberal arts institution built on Christian values, Berry’s mission is to have all students lead with their “Head, Heart and Hands.” BC sits on one of the world’s largest campuses with 27,000 acres with over 80 miles of hiking trails. Most popular majors include Zoology, Psychology, and Communication. Athletics thrive on this campus as the Vikings compete in NCAA Division II athletics.

Serving as Georgia’s public liberal arts university, Georgia College campus is located in the state’s former capitol. Capstone experiences are paired with one of the over 30 degrees offered by the college. Most popular majors include Nursing, Business, and Marketing. The Bobcats sport blue and green as they compete in the NCAA Division II Peachbelt Conference.

This liberal arts rooted institution has a long history with its founding in 1780 making it one of the oldest institutions in the country. Translated from latin, Transylvania’s name means “across the woods” due to its location in the heavily forested region of Transylvania Colony. As a large producer of U.S. statesmen, Transylvania is the alma mater of two U.S. vice presidents, two U.S. Supreme Court justices, fifty U.S. senators, 101 U.S. representatives, 36 U.S. governors, and 34 U.S. ambassadors.

Berea has an inclusive Christian character on its campus located 35 miles south of Lexington, KY. As a point of distinction, Berea charges no tuition and primarily serves students from the Appalachia region. All students work at least 10 hours per week on its campus that focuses on learning, labor, and service. There are 32 majors offered with the most prominent being Mass Communication, Manufacturing Engineering, and Computer and Informational Sciences.

The motto of this university is “People Creating Possibilities” and there are many possible majors to study at Nicholls, including: Business, Psychology, Petroleum Technology, Culinary Arts, Biology, and Family Consumer Science, among others. The Nicholls Colonels sport the colors red and grey.

Our Lady of the Lake College

Since its first class of nine students in 1923, OLLC has grown to enroll over 1,600 students. This Catholic university focuses on health sciences and offers just seven majors with the most prominent being Nursing, Pre-Medicine, and Health Services Administration. OLLC has been named six times to the President’s Higher Education Community Service Honor Roll for its level of community service hours completed.

A knight is featured on this university’s crest, which makes sense as they’re known as the Crusaders. They sport three school colors–red, black, and white. Of the 825 applications sent in, William Carey accepted 420 of them, giving the school an acceptance rate of 50.9%. The most popular major on campus is Psychology.

Mississippi College was established in 1826 making it the second-oldest Baptist-affiliated college in the United States. With its enrollment of over 5,000 students, it also denotes MC as the largest private institution in the state. With the core of its academic program founded in the liberal arts, its largest majors are Nursing, Business, and Kinesiology. The Choctaws compete in NCAA Division II athletics.

Founded in 1883, Belhaven offers a broad range of 70 study areas through a Christian worldview. The science curriculum is one of only two Christian universities recognized by the White House STEM Initiative. Business Administration, Social Sciences, and Health Care Administration top the program charts.

University of North Carolina at Asheville

Founded in 1857 as a women’s college, Queen’s University of Charlotte has grown into a comprehensive co-ed institution admitting men since 1987. Their International Experience Program allows juniors and seniors a variety of study abroad programs including study tours and language programs. The most popular majors are Nursing, Business, and Communication and Rex, their mascot, cheers on the Queens Royals on the field.

This all-women undergraduate institution has grown to nearly 2,000 students making it the largest of its type in the Southeastern U.S. It’s unique Strong Points program provides students a personal coaching and advising model designed to help make the most of their college experience. Nearly 32% of students complete undergraduate research opportunities and 30% study abroad.

Despite being located in Spartanburg, the mascot of Wofford is actually the Terrier. Old gold and black are the school colors, which students and athletes wear at the popular soccer, football, tennis, and baseball games. Wofford has a 71% four year graduation rate, and a 11:1 student to faculty ratio.

The Citadel is best known nationally for its Corps of Cadets which makes up its 2,300 undergraduate student population. Students live and study under a classical military system that emphasizes leadership and character development. Annually on Leadership Day, over 7,500 hours of community services is given by the Corps of Cadets.

As a non-denominational Protestant university, Bob Jones University views learning through a biblical worldview lens. In addition to the 50 majors offered, BJU teaches individuals to apply the Scriptures to practical Christian living. The Bruins sport their official blue and white as they compete in Division II of the National Christian College Athletic Association (NCCAA).

Sewanee–The University of the South

Located in a small city, Union University offers up to doctorates, but popular undergraduate majors include nursing and business. The university has a 9 to 1 student to faculty ratio with a high first year retention rate of 85%. Applying students should keep in mind that Union only accepts 63% of those who apply.

Only for undergraduates, the Randolph-Macon College is located right outside the capital city of Virginia: Richmond. With the motto “Building Extraordinary Futures” the students attending the school tend to go towards majors in biology, economics, psychology, and communication. A good number of students are athletes, with 460 taking part in sports like football, baseball, swimming, and field hockey.

Hampden-Sydney College is known as a men-only school and is the oldest private charter college located in the southeast as well as the last college founded prior to the American Revolution. It’s one of the last all-male colleges in the country. Three top majors include business, economics, and biology.