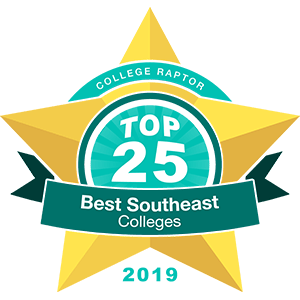 The Southeastern United States offers a wide variety of colleges and universities. Known for its beautiful weather and rich cultural history, this diverse area has a higher education experience for every kind of student.

Here are College Raptor’s picks for the top 25 best colleges in the Southeast.

Founded in 1826, Furman is the oldest private university in South Carolina. Furman competes in 20 varsity sports as the Paladins, with purple and white as their school colors. Business is the most popular major on campus, followed by Health, and Political Science. The Bell Tower is the icon of the university, featured on its official seal.

Known locally simply as “State,” North Carolina State University prides itself on being an academic powerhouse, especially in STEM fields, education, business, and medicine. Nearly 27,000 applications were sent into NCSUR last year, and 51% of them were accepted. Over 80% of students hail from North Carolina, but other students come from all over the country.

Located in the bustling Triad Region of North Carolina, Elon University has a student-to-faculty ratio of 12:1, making this a great choice for students who prefer a more intimate classroom setting. 67% of applicants are accepted into Elon. Elon’s mascot is a phoenix, chosen because the school survived a devastating fire in 1923.

James Madison University was initially founded as a women’s college in 1908, but became coeducational in 1966. However, there are still more women on campus—59% of undergraduates are women, as are 70% of the graduate scholars. Their school colors are purple and gold.

This is a highly selective school with an acceptance rate of around 36%. Registered Nursing, Finance, Psychology, Biology, and Economics are the most popular majors on campus. “Magna est veritas” is the Latin motto of UM, translating to mean “Great is the truth.” 64% of all students on campus study at the undergraduate level.

There is no application fee at Rhodes, and students score an average ACT score ranging from 27–32 or an SAT score ranging from 1280-1460. Students from 48 states and 44 countries study on a small, cozy campus with a student/faculty ratio of 10:1. The school’s motto is “Truth, Loyalty, Service.”

Clemson has over 80 undergraduate and 110 graduate degree programs to choose from. A majority of students on campus (79%, in fact) study at the undergraduate level. In terms of entrance exams, between a 26 and 31 is the average ACT score for incoming freshman, or 1270 — 1420 on the SAT.

More commonly known as Georgia Tech, this school actually has two sets of school colors: Buzz Gold and white for academics, and Tech gold and white for athletics. They also have two mascots, one is a yellowjacket named Buzz, and the second is known as the Ramblin’ Wreck, a 1930 Ford Model A sport coupe.

Wake Forest’s motto, “Pro Humanitate” (For humanity), is reflected in many of their notable alumni and their work to better improve the overall human condition. One notable graduate is golfer Arnold Palmer. Poet Maya Angelou served in the English faculty for a time. The school has a test-optional policy for accepting undergraduate students.

Located not far off the Mississippi River, Tulane University has an acceptance rate of 21%. The school has many alumni who have contributed not only to the arts, but also to business, medicine, law, and American history. Tulane’s colors are sky blue and olive green. Their mascot is Riptide the Pelican.