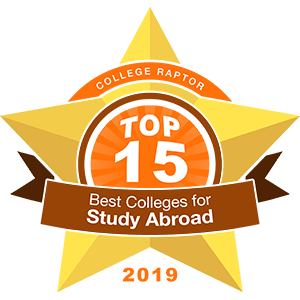 Studying abroad for a semester or two in college is a truly unique experience, and the chance to see and interact with a different part of the world. Many students highlight it as some of their fondest memories of their college years.

Which is why we wanted to shine the spotlight on colleges with booming study abroad programs. Here are the top fifteen colleges where the most students participate in study abroad.

Spelman is a historically black women’s liberal arts college with a long list of notable alumni, including politicians, singers, authors, and academics. Spelman has a 40% acceptance rate. The school’s colors are Columbia blue and white. Psychology, Biology, Political Science, Economics, and International Studies.

“Ever Upwards” (Ad Altiora Semper) is the motto of Hartwick. Students from over 30 states and 22 different countries study at the school. 77% of students come from the state of New York. Registered Nursing, Business, Biology, Sociology, and Political Science are the five most popular majors.

Orange and maroon make up Susquehanna’s colors and their school motto is “Achievement, Leadership, Service.” They play as the River Hawks in NCAA Division III sports, including football, soccer, lacrosse, and swimming/diving among others. SU has an acceptance rate of 70% and a 12:1 student-to-faculty ratio.

Located right on the Tampa Bay, Eckerd college has a conch shell on its logo. It should come as no surprise, then, that the two most popular majors are Environmental Studies and Marine Biology. Eckerd sports three official school colors–teal, navy, and black. Their sports teams are known as the Tritons.

Interestingly, Goucher is one of the only colleges to actually require undergraduate students to study abroad. Psychology is the most popular major on campus, followed by English and Speech Communication. They have 260 athletes on campus, who compete in sports such as lacrosse, field hockey, swimming, and equestrian events.

The Taylor University Trojans wear purple and gold while competing in 16 varsity sports. A whopping 98% of students on campus study at the undergraduate level. Taylor also has a high rate of acceptance–87%. Most students come from Indiana, but many others come from the surrounding states of Illinois and Ohio.

Agnes Scott College has an interesting tradition, where each class is assigned a color and then they vote on a mascot correlating with that color. The tradition creates class pride. Agnes Scott has a 66% acceptance rate and student-to-faculty ratio of 10:1. Public Health is the most popular major on campus, followed by Psychology.

Centenary is the oldest chartered liberal arts college west of the Mississippi River, founded in 1825. 89% of the students on campus study at the undergraduate level, while the remaining 11% are graduate students. Centenary’s sports teams are known as the Gentlemen and the Ladies, whose team colors are maroon and white.

For this Study Abroad list, we included data from the Institute of International Education’s (IIE) 2017 “Institutions by Undergraduate Participation in Study Abroad” report in our calculations.

In College Raptor’s overall rankings, colleges are ranked based on a combination of factors, including graduation rates, campus diversity, endowment per student, and other data as reported via the National Center for Education Statistics (NCES) for the most recently-available enrollment year. Some colleges may have been excluded from rankings based on certain criteria, including specialization and classification. Learn about our full methodology.