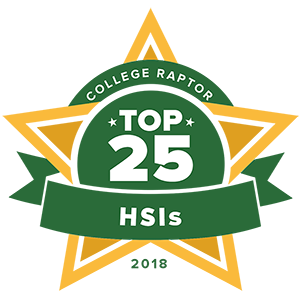 Hispanic Serving Institutions, or HSIs, do just what their name implies. These schools are dedicated to serving Hispanic and Latino students in the United States. The mission of these schools is to increase the aid, support, and access to quality higher education for students of Hispanic descent—particularly first-generation and low-income students. However, HSIs open their doors to students of all races.

Here are College Raptor’s picks for the Best HSIs.

California State University–Fullerton has the largest student body out of all other CSU campuses. The university boasts Tuffy the Titan, an elephant, as their mascot. Actor Kevin Costner graduated from the Fullerton campus in 1978 with a BA in Marketing and Finance.

Cal Poly Pomona is one of two polytechnic schools in the California State University system. The campus has a Japanese garden and a free campus shuttle for students to use. The school accepts 59% of the almost 33,000 applications they receive each year. The top majors are Business Administration, Hospitality Administration, and Mechanical Engineering.

CSU Chico’s campus ninety miles north of Sacramento is the second oldest in the entire California State University System. Of the 23,000 applications that come in each year, the school accepts around 15,600, making its acceptance rate 65%. Of its diverse array of majors, the most popular are Business, Psychology, and Criminal Justice.

The largest campus in the University of Puerto System, Rio Pedras has granted the largest number of doctorate degrees to Hispanics in the United States. The college provides its students with a wide variety of courses of study, including 70 undergraduate programs and 71 specializations.

MSMU has been educating women leaders since 1925 and most recently became a university in 2015. The institution has two campus locations conveniently located only 16 miles apart. With 68% of graduates continuing on to advanced degree programs, the largest majors are Nursing, Business Administration, and Psychology.

Despite its name, CSU-Channel Islands is nestled against the foothills of the Santa Monica Mountains in mainland California, just a short drive to the Pacific Ocean. As the newest institution in the California State University System, CSU-Channel Islands was founded in 2002 in buildings that were originally constructed in 1934 as part of President Franklin D. Roosevelt’s New Deal during the Great Depression, . While it has no intercollegiate athletic teams, it does feature Ekho the Dolphin as its official mascot.

Founded in 1944 by the Pacific District Conference of Mennonite Brethren Churches, FPU is a Christian university with four campuses in the Central Valley region of California. With academic rigor founded in the Christian faith, FPU admits 50% of its applicants on average. Top majors at the university are Psychology, Hospitality Management, and Biology.

Currently the fourth largest institution in the U.S., FIU has an extensive array of academic programs – 280. The newly developed TEDxFIU strives to make contributions to the world through ideas, concepts, and projects from FIU. The FIU Panthers compete in the NCAA Division I and in 2009 hired NBA Hall of Famer Isiah Thomas as head coach of the men’s basketball team.

Founded as Lordsburg College in 1891, the University of La Verne has nearly 50,000 alumni worldwide. The university has a highly diverse student body, with over 40 percent of its students identifying as Latino/Hispanic. ULV’s students are committed to giving back to their community and must complete community service projects to graduate.

Hunter College is the largest within the CUNY system and is located in the heart of Manhattan in the Lenox Hill neighborhood. The school is selective with only 25% of students being selected.  With 70 undergraduate programs to choose from, the most popular are Psychology, English, and Nursing.

As the newest school in the UC system, UC Merced is the first American research university to be built in the 21st century. Merced is focused on environmental sustainability through its Triple Net Zero Commitment and all of its buildings are LEED certified. With seven research institutes across the university, the largest majors include Biology, Psychology, and Business Administration.

11. University of Illinois at Chicago

UIC is the largest university in the Chicago area, spread across three campus locations in the Little Italy, University Village, and Near West Side areas of the city. The university offers a broad range of academic offerings, with 85 bachelor’s programs designed to allow undergraduates to explore their intellectual interests. Sparky D. Dragon, UIC’s mascot, cheers on the NCAA Division I Flames in 18 intercollegiate sports.

As one of the nation’s most diverse liberal arts colleges, students of color make up 60% of the campus community. Its location between Los Angeles and Orange County provide students an array of off-campus activities. Their mascot, Johnny Poet, yields a large pen as he leads the Poets onto the field in their purple and gold.

With a foundation in Catholic heritage, students from all faiths populate this liberal arts college. Over 70% of students complete an internship experience prior to graduating in one the 70 majors offered. Since 2008, 43 Hilltoppers have been named as Fulbright Scholars.

SDSU was founded in 1897 as the San Diego Normal School with a mission of educating local women as elementary school teachers. Since then, SDSU has grown to be a leading research institution and has produced over 65 Fulbright Scholars in the past decade. The university features more than 75 academic majors for undergraduate students including Business, Philosophy, Communication Studies, and Astronomy.

Nestled between Los Angeles and Santa Barbara, California Lutheran’s campus is located just 20 minutes from the Pacific Ocean. Students at Cal Lutheran hail from 38 states and 35 countries and have an average ACT of 27. The most popular majors on campus are Business Administration and Management, Psychology, and Speech Communications and Rhetoric.

Known for innovation, ASU has a reputation for advancing technologies across many sectors. As one of the largest institutions in the U.S., ASU received nearly 25,000 applications in 2017. The downtown campus was established in 2006 and houses seven different colleges including the Walter Cronkite School of Journalism and Mass Communication.

Located 50 miles east of Los Angeles, UC Riverside is one of the most ethnically diverse institutions in the U.S. Most known for its extensive research on citrus diversity and entomology, UC Riverside’s largest majors are Business Administration and Management, Psychology, and Biology. The Highlanders compete in the Big West Conference and their nickname was inspired by the altitude of their campus in the foothills of Box Spring Mountain.

Originally meant to be a showcase for innovative, cross-disciplinary undergraduate education and modern architecture, UC Santa Cruz was founded in 1965. With a diverse variety of ten separate academic colleges, the top majors at Santa Cruz are Psychology, Business, Cell Biology and Computer Science.

The palm tree lined campus is one of the largest in the UC school system.  With over 70,000 applications received last year, this research university is a top destination for students interested in psychology, sociology, and economics.  UCSB operates 8 research centers which are funded by grants through the National Science Foundation (NSF).  The Gauchos compete in 10 men and 9 women sporting events.