4 Myths: College As Seen on TV (and Movies!) 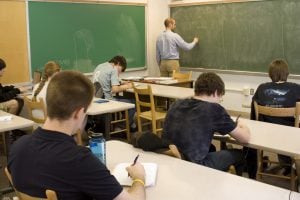 There are countless college scenes in our favorite movies and TV shows. Often the first image conjured up when associating movies and college is a big party with lots of red Solo cups and silly bets or dares. Or maybe some freshman or new frat member hazing ritual.

But there is a world of difference between the big screen and reality. Movies and TV can reinforce stereotypes and misconceptions that just aren’t entirely true, and so many incoming students find themselves thinking, “Huh, this isn’t like the movies at all!”

College is One Big Party

Many students eagerly anticipate (or dread) the social party scene of college. Cinema makes it out to be the highlight or main focus of going to college. It seems that there are rarely any scenes of the students actually in class. Oftentimes the one student in the show who is studying is portrayed as “uptight” and that they need to “live a little.”

In reality, college is a balance. Sure, there may be some big bashes, but not nearly as many as you might think. The reason you’re going to college is to get an education after all, and so that should be (and oftentimes is) the priority of every student. Most time will be spent in class, studying for class, doing class assignments, and participating in extracurriculars or intramural activities. There will be Friday nights and Saturdays where students stay in their rooms in order to catch up on a paper.

If your school is a so-called “Party School” don’t worry. You can choose whether or not you want to participate, or how much you want to participate. If your idea of a fun night is ordering a pizza and having a Netflix or video game marathon, that’s totally cool. You can likely find a club on campus that holds the same interest, or just invite a couple of your buddies over for a great night in. If you do want to hit the town and socialize, just keep in mind that balance is key. Be smart, be safe, don’t jeopardize your education.

My Professors Will Either Be Monotone Drones, Drill Sergeants, or Inspirational Mentors

“Bueller? Bueller?” It seems that professors fall into one of these three categories in the movies. The boring and dull teachers seem to pop up in comedies, where half the class is asleep and the other half is not paying attention except for that one nerd in the front row. The super strict teacher is another common trope—the ones that lock the doors after class starts or humiliates one student in front of the entire lecture hall. The third stereotype is a more pleasant one—the warm-hearted professor who forges a bond with their students and changes their lives forever.

True, there will be a range in professors and teaching styles over your college years, but the examples that show up in movies are usually on extreme ends of the various spectrum. Do you remember your high school teachers? You had some that were really funny, some that were sort of boring but taught things in a way you understood, some were tough graders but it made you better in the long run? College professors aren’t all that much different. You’ll get a variety, but they are rarely the caricatures movies make them out to be.

Everybody’s in a Frat or Sorority

It seems like every single student in the movies ends up joining a sorority or frat. You’ll see them bond with their brothers or sisters, get into shenanigans, and generally go everywhere together.

However, this is not necessarily the case. The percentage of the student body involved in Greek life will fluctuate campus to campus, but not every student rushes or pledges themselves to a frat or sorority group. Like all decisions, there are pros and cons in deciding to join the Greek life, but rest assured you don’t have to if you don’t want to—you won’t be shunned or anything like that.

Freshmen Will be Hazed / Tormented

Many a movie sees upperclassmen picking on the newbies. They claim it’s some “right of passage” or there’s a “campus tradition” in order to justify their bullying. It’s a big concern that some incoming students have.

Luckily, this sort of hazing is not the norm. Most of the time your fellow students won’t even know what grade you’re in unless you outright tell them. With everyone’s age being similar for the most part, it’s hard to tell who’s younger or older. One of my college buddies that I’d known for nearly a year looked at me in shock when I mentioned I was picking out my senior classes for next year. She said, “I thought you were a freshman!”

The point is, people are far too busy studying to bother the underclassmen. And besides, they were all freshmen at one point anyway, they remember what it was like. All in all, you’re unlikely to see any major hazing as a first-year student.

Movies and TV shows can shape our perception of the world, and not always for the better. Incoming students can sometimes have misconceptions or unwarranted fears based on what they’ve seen played out in fictional stories. Stepping onto campus for the first time can lead to one big reality check—which can be a big relief or a curve-ball. Just keep an open mind and remember: college is what you make it.