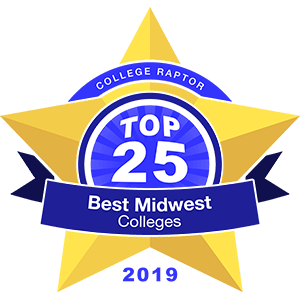 America’s heartland has a lot to offer: friendly people, prosperous industries, and a host of amazing colleges.

Here are College Raptor’s picks for the top 25 best colleges in the Midwest.

Originally intended to teach scientific agriculture, Michigan State University is now one of the largest universities when it comes to enrollment in the United States. Top majors currently include advertising, economics, logistics, and biology. The university is also well known for their football. The Spartans compete each year against their rivals, the University of Michigan.

A smaller school, Kalamazoo College has a high first year retention rate of 88%. Kalamazoo College features the K plan, where they focus on experiential education, study abroad opportunities, and community involvement. Students must submit a work intensive project or demonstrate a skill, such as proficiency in another language, in order to graduate.

Also known as RHIT, the Rose-Hulman Institute of Technology focuses on teaching math, science, and engineering. It has a first year retention rate of 94%. A majority of students tend to study mechanical engineering with chemical engineering coming in second. The first Chemical Engineering degree in the US was awarded at RHIT in 1889.

Accepting only 37% of applications, Denison University is a liberal arts school with many students choosing to major in economics, mass communication, biology, or psychology. Part of the North Coast Athletic Conference, the university also has high sports participation, with 540 athletes on campus. Common sports include football, basketball, baseball, and track.

With over 80 majors and programs available on the campus, Illinois Wesleyan University has a student-to-faculty ratio of 10:1. With the motto “Scientia et Sapientia” (“Knowledge and Wisdom”) students tend to focus on business or nursing majors, but accounting, biology, and psychology are also top choices at the liberal arts school.

The largest university in the Indiana University system, Bloomington is considered a “Public Ivy” school. Just over 50% of students are from the state of Indiana, but the remaining amount come from all over the country and world. A part of the Big Ten Conference, the university is also well known for its strong and popular Greek system.

Also known as Miami of Ohio, Miami University at Oxford is a public research university and offers an extensive liberal arts education. A Public Ivy school, the university has a  popular Greek system, with about 33% of all students participating. 92% of students decide to stay at the school after their first year, with many going on to major in marketing, finance, and public relations.

Oberlin College, founded in 1833, is the oldest coeducational liberal arts college in the country and was the first college to admit African-Americans (1835) and women (1837). The school is highly selective, accepting about 34% of the 7,762 applications it received in 2017. Most students major in music performance, but other popular majors include biology, environmental science, political science, and history.

A private Christian school, Wheaton College was actually a stop on the Underground Railroad and later saw one of the first African-American college graduates in Illinois. Focusing on academics and faith, almost all students choose to stay at the school after their freshman year (95%). Wheaton College also boasts a high four year graduation rate (81%).