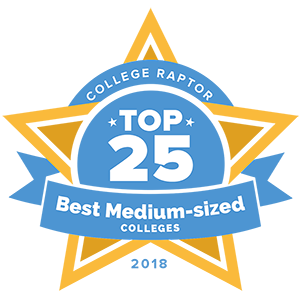 While many students have strong opinions on going to small and large colleges, the medium-sized colleges can be a great fit for those students who don’t have strong feelings either way.

These schools allow students to get to know others on campus, while still allowing them the anonymity that can come with a large school. For the purposes of our list, we are considering schools with total enrollments of 2,000 to 10,000.

Lehigh University gets its name from its location in the Lehigh Valley and is one of the largest private universities in the U.S.  With one-third of its undergraduate students enrolled in the P.C. Rossin College of Engineering and Applied Sciences, the average ACT score is between 30 and 33.  It is also considered one of the twenty-four “Hidden Ivies”.  Lehigh shares the longest football rivalry in NCAA history with Lafayette College.

Located in a suburban area, The College of New Jersey’s campus is in close proximity to New York City and Philadelphia.  In addition to academics, students enjoy over 200 clubs and organizations.  The new Campus Town complex provides housing and recreation complexes for students as well as local businesses.  The “Lions” compete in NCAA Division III athletics.

Babson is a school all about entrepreneurship, in fact, it’s known as the “Entrepreneur’s College.” First year students create, run, and dissolve a business of their very own, as part of their Foundations in Management course. Given that alone, it makes sense that their mascot is named Biz E. Bever.

Located in the suburbs of Boston, this medium sized research university was founded in 1948 by the American Jewish community.  It is home to the Heller School of Social Policy and Management which was the first program of its kind to bring attention to the gap between social welfare and social policy in the U.S.  With top majors in economics, psychology, and biology, the institution has a 34% acceptance rate.

Through its liberal arts curriculum, Colgate has been providing its students small class sizes emphasizing student-faculty interaction since 1819.  In addition to its 55 majors, the Upstate Institute was established to give back economically and socially to the surrounding community.  Campus is also heated with biomass producing net zero carbon emissions.  With these characteristics, Colgate prepares its students to have a social and environmental conscious.

Santa Clara University is the oldest still-operating institution of higher education in California, and has remained in its original location for 166 years. The university’s 17 varsity sports teams play in NCAA Division I, and its mascot is Bucky Bronco. Students at the highly selective school tend to have ACT scores between 27–32 and SAT scores between 1,220–1,410.

8. College of William and Mary