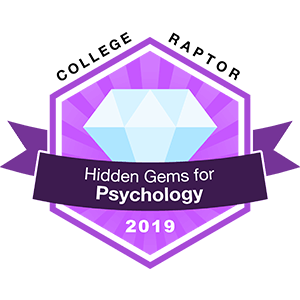 Psychology is one of the most popular college majors out there, and students go on to make a big impact in the world. It’s an incredibly important field to say the least.

We wanted to highlight lesser-known schools that gave psychology students a good “bang for their buck.” We took the college’s average median pay and subtracted the national average starting salary of psychology majors ($38,300), of the schools that had a positive number, we sorted by the overall College Raptor rank to determine the best psych-degree granting colleges that were also financially valuable. We limited our selections to the top 800 in overall rankings, and excluded US military schools.

Here are the top ten hidden gem schools for psychology, where you can earn more than the national average!

With an 81% first-year retention rate and 13 to 1 student-to-faculty ratio, Biology is the most commonly chosen major at Ouachita Baptist University. However, Psychology is another popular major and the school has developed a strong program. Students who take part in this major have shown off their work at conferences and in scientific journals, on regional and international levels.

Located next to the Westfield River, this university was founded in 1838 by politician Horace Mann. The school has three colors: blue, white, and gold. Their mascot is an owl named Nestor. Criminal Justice, Business, Speech Communication, Psychology, and Health Education are the five most popular majors on campus.

A liberal arts school, Salem College is the oldest women’s college as it was founded in 1772. However, some men are admitted to their graduate programs. Psychology is a popular major at the college, along with Education and Speech Communication. There is a 11 to 1 student-to-faculty ratio on campus.

“Esse non videri” is the Latin motto of this college, meaning “To be, not to seem.” Though St. Joseph’s started off as a women’s college, it became coeducational in 1970. However, there are still more female students studying at St. Joseph’s—65.8% of undergraduates are women while 34.2% are men.

Berea College is selective, only accepting about 35% of students who apply, though 70% of students who are accepted follow through to attend Berea. Psychology is a popular major on campus. It is one of the only tuition-free colleges in the US, offering each student the equivalent of a full-tuition scholarship.

5. College of the Ozarks

Psychology is a required core class at John Brown University, and students who decide to major in this subject go on to study and develop their research skills. With an 85% first-year retention rate, students are often from Arkansas and Texas, but many come from all over the country to attend. Other popular studies include Business Administration and Engineering.

Psychology is, by far, the most studied major at University of Minnesota – Morris (UMM). The school is well known for its record regarding this subject and its program ensures students are introduced to all aspects of the science while preparing them for their future careers. Class sizes are also fairly small with a 12 to 1 student-to-faculty ratio.

Penn State Behrend (PSB) is one of the many campuses of Pennsylvania State University. Starting as a branch of the school, it became a campus for the university in 1959. Students studying Psychology at PSB also have the opportunity to take advantage of the centers on campus and publish their own research.

Graduates of Grove City College have included CEOs, NFL players, and U.S. Deputy Attorney Generals. With a 94% first-year retention rate, 80% of students go on to graduate within four years at the school. The three most popular majors include Biology, Speech Communication, and Mechanical Engineering.