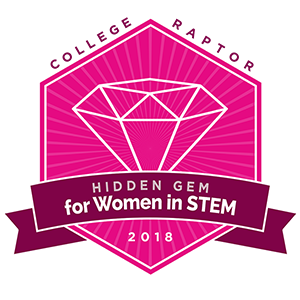 STEM fields are the fastest-growing career market out there, yet only 6.7% of college-going women graduate with a STEM degree–compared to 17% of men. There are many organizations, programs, and schools dedicated to encouraging young women to pursue science, technology, engineering, and mathematics majors.

The following colleges are true hidden gems for women in STEM fields. To qualify as a College Raptor Hidden Gem, a school must have the following requirements:

And for our Women in STEM hidden gem considerations, at least 30% of the degrees awarded by a college must be STEM degrees. The highest percentage of women receiving degrees is also a determining factor.

Here are the top 25 Hidden Gems for Women in STEM.

A school for undergraduates only, Central College has a good first year retention rate of 79%. A majority of students are from Iowa, but many also come from the surrounding states. Teaching and biology are top majors, but exercise physiology, business, and psychology are popular choices for Bachelor’s degrees.

South of Rochester, Alfred University is located in Western New York. The school’s name’s origins remain a mystery, though many associate the name with King Alfred, the Saxon king. This has resulted in purple and gold colors on the field with a mascot of a Saxon. A statue of the king also sits in the campus quad.

Almost all students attending Juniata College are undergraduates who tend to major in biology, environmental science, psychology, and biochemistry. The college receives 2,386 applications each year and accepts approximately 1,789 students. In the fall, 356 of these students will enroll. 85% of freshman will stay at the school after they complete the first year.

Accepting only 54% of those apply, SUNY College of Environmental Science and Forestry is a fairly competitive school. Most majors focus on biology, such as conservation, environmental, and wildlife. With a student to faculty to radio of 12 to 1, a majority of students stay after their first year, resulting in an 88% retention rate.

University of Minnesota’s Morris campus accepts approximately 58% of applicants. A participant in the Upper Midwest Athletic Conference, popular sports include football, baseball, track, and soccer. Biology is the top major at the university, but psychology and economics are not far behind.

Just outside Philadelphia, Ursinus College is a liberal arts school and home to the Phillip and Muriel Berman Museum of Art. After their first year, 84% of freshman stay at Ursinus and 79% go on to graduate within four years. Most students are from Pennsylvania, but a number also come from the east coast.

Kalamazoo, more affectionately known as “K,” is one of the oldest in the U.S. with its founding in 1833. Its 28 major offerings are enhanced by the “K Plan” which ensures all students have internships, research, and study abroad opportunities. In fact, 71% of graduates participate in career development programs and 70% study abroad. Kalamazoo produces more Peace Corps volunteers per capita than any other school in the U.S.

16 SUNY College of Agriculture and Technology at Cobleskill

This SUNY College is perfect for students wishing to pursue a degree in agriculture. The most commonly selected majors are animal sciences, business administration, agricultural management, wildlife management, and plant sciences. Almost all attending students are from the immediate New York region.

Despite it’s name, St. Mary’s is a non-secular school. It’s name gives homage to the city where it’s based. Of all the students on campus, a whopping 98% are undergraduate students. St. Mary’s has a 87% first year retention rate, and a six year graduation rate of 81%. The campus is located on the banks of the St. Mary’s River.

Wartburg College’s motto is “Worth It.” The only Iowa private college offering a music therapy major, other choices include biology, business, and communication. The college has nearly 600 athletes participating in sports like football, lacrosse, track, wrestling, and tennis. About 80% of freshman remain at the college after their first year.

Nursing is by far the most popular major at University of Detroit Mercy, beating out the next highest (biology) by more than half. Other majors that are commonly chosen are business, dental hygiene, and architecture. The university has a 10 to 1 student to faculty ratio with an 83% first year retention rate.

Although it was founded in 1963, Pitt-Greensburg’s current central location is on the former estate of Charles McKenna Lynch 35 miles outside of Pittsburg. Living and learning academic villages help connect like-minded students. Most popular majors include Biology, Psychology, and Business.

Known for its strong undergraduate program, over 100 students annually complete research alongside faculty.  Allegheny ranks in the top 5% of all schools in the U.S. for the percentage of students it sends to Ph.D programs. With 100% of students living on campus, engaging in campus life is equally important as academics. Since becoming a founding member of the North Coast Athletic Conference, 550 Gators have earned All-American honors.

Johnson & Wales University in Denver focuses on preparing students for their future careers after school. The culinary arts and food-service systems are popular choices at the Denver campus, but parks and recreation management is not far behind. Most students are from the home state, but many students also come from Texas and California.

This mid-sized public university is located only 30 minutes away from Minneapolis/St. Paul, MN. Two key factors to all education at UWRF is the commitment to a global education including study-abroad and an Internationalization Laboratory and innovative research through one of its many funded programs. Over 50 majors are offered with the most popular being Business Administration, Animal Sciences, and Biology.

This scenic campus is nestled right between the Saco River and the Atlantic Ocean. Known for its health sciences programs, it should come as no surprise that the most popular majors on campus are Registered Nursing, Health Services, Biomedical Sciences, and Dental Hygiene. They have a 13:1 student to faculty ratio.

What started out as an agriculture college in 1896, DelVal has grown into a dedicated liberal arts and science institution with 25 undergraduate majors. The required Experience360 program allows all students to participate in experiential learning opportunities. The 1,000 acre campus also acts as a living laboratory for its students. Most popular majors include Business Administration, Biology, and Animal Sciences.

College of Saint Benedict is the all-women sister college to Saint John’s University. The two have been close partners since CSB’s founding in 1913. Students have full access to both campuses and they even share the same academic curriculum. College of Saint Benedict was designated one of the top producer of Fulbright Scholars with 15 in the past three years.

This liberal arts college was the first member of the Seven Sisters colleges, and is an all-female undergraduate school. The acceptance rate is 52%, with a 91% first-year retention rate. Biology/Biological Sciences, Economics, and Psychology are the most popular degrees. Standardized test scores are not required for admission.