Every year celebrities are asked to give commencement speeches at notable universities across the country. From movie stars to authors, to politicians, and directors, these celebrities impart moving wisdom to the graduating class they address. But these pieces of life advice aren’t only for their specific audience, but for the world over. Take a look below to see 4 amazing celebrity commencement speeches, by 4 pretty amazing people. 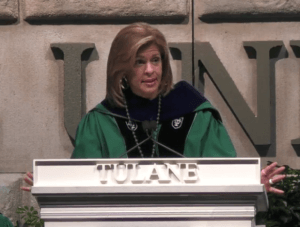 News anchor and co-host of a popular Today segment, Hoda Kotb was not always so successful. In her commencement speech at Tulane University Kotb recounted the story of how she got her first job–after 27 rejections. As she narrated the ups and downs of her life story, Kotb gave ten life lessons to the graduates. Here are some of the highlights:

Said in reference to the man who not only gave Kotb her first job but who also gave her a second chance after a miserable mistake. One person can change your life.

Kotb spoke of that same man and how thankful she was for his help. After all, she wouldn’t be where she is today without him and many others. The same goes for every single one of us.

A survivor of breast cancer, Kotb gave an excellent bit of advice to people who have survived any sort of tragedy, loss, depression, illness, divorce, or other struggles. If you’re still here, you can get through anything.

She ended her moving speech with, 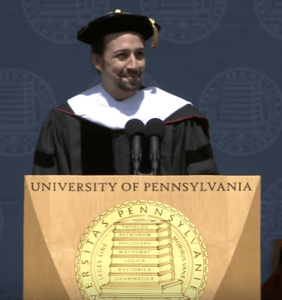 Thrown recently into the spotlight thanks to the massive success of Hamilton: An American Musical, singer-songwriter, composer, writer, freestyle rapper, and actor Lin-Manuel Miranda spoke to the graduating class at the University of Pennsylvania. Here are just a few of the powerful quotes he gave:

His speech is full of storytelling themes. In this quote, Miranda spoke of how he had to leave key historic figures like Benjamin Franklin and Benedict Arnold out of his hit-musical in order to focus on a different element of the story. Whole narratives can be defined by what stories are told and which ones are passed over.

Miranda spoke of the grueling efforts and years of dedication it took to get his show In the Heights to Broadway; he also recounted the times where young people would come up to him and say how much they related to the musical and found inspiration in it. Stories can form connections that unite even the most unalike people–there is always power in a story, so always tell yours.

Miranda listed off a long string of life-events waiting for the graduating class–the inevitable ups and downs, twists and turns, and challenging moments that were ahead. That’s life.

He ended his equal parts comedic and moving speech with this: 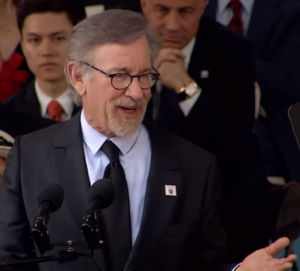 Jaws, Jurassic Park, Indiana Jones, and Schindler’s List are just a few of the iconic movies brought to life by Steven Spielberg. A visionary director and innovator, Spielberg gave a highly quotable speech to Harvard graduates.

Often comparing and contrasting real life to the movies, Spielberg spoke on the choices people make defining who they are.

Spielberg spoke at length about students finding their own voices, never letting their morals sway, and always listening to their intuition.

Spielberg encouraged students that in order to build a better future we have to understand the past. If we want the world to improve, we must speak out against hatred and instead connect with our shared humanity.

The director finished his speech with this: 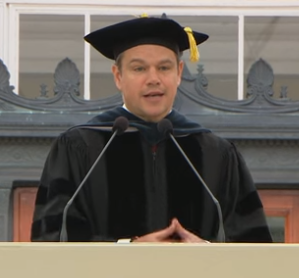 Star of such hit films as Good Will Hunting, the Bourne Identity, and the Martian, Matt Damon is also a humanitarian in addition to being an actor. He draws on both his experiences with movie-making and his experiences around the world working to provide access to clean water for millions of people. His speech had far too many excellent quotes to fit in, but here’s a handful:

Damon spoke of theory that our world is a computerized simulation of higher-intelligence beings and argued that no matter if it were true or not, every action we make is important. He encouraged students do go out and do interesting things.

While speaking about the numerous problems facing the world today, Damon referenced the advice that former president Bill Clinton gave to him about engaging with problems rather than ignoring them. Engaging is the first step in solving.

Damon drew on his time in South Africa and meeting with women who had escaped to the country for their freedom. One woman in particular caught his attention with her positivity despite her nightmarish struggles. Damon urged that the only reason he got to meet her, got to experience her joy, was that he physically engaged with a problem and didn’t just sit back and watch.

He rounded out his speech with a question for the graduates:

There were many more amazing celebrity commencement speeches this year, as well as inspiring words by non-celebrities. These were just a small few selections of wise words given not only to the graduating class, but to the humanity as a whole.

Congratulations, Class of 2016. Now go out and change the world!