Home > Getting In > ACT & SAT > Student Survival Guide: A Breakdown of the ACT

Student Survival Guide: A Breakdown of the ACT 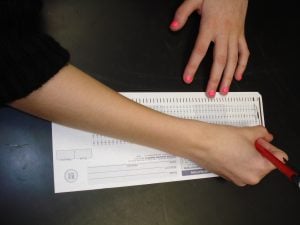 Since you were in junior high, you’ve heard whispers of The Tests. Spoken of by everyone from teachers to guidance counselors to nagging parents, the ACT and SAT enter your life years before you even want to think about it. Suddenly, around your sophomore year of high school, the pressure starts to rise. You see the acronyms floating in your alphabet soup, or you join a practice class or hire a tutor. The Tests are here, and it’s time to put the knowledge you’ve gained over the past ten years of schooling to work. It’s a lot of pressure to put on someone who might not even have a driver’s license yet.

Don’t fear, though; while people talk it up like it’s the end of the world, a four-hour sprint that will decide the rest of your life, The Tests are not something to be afraid of. As long as you know what to expect and understand the material in front of you, it’s just another stepping stone on your road to a successful life. You’ll find that colleges accept either the ACT or SAT. It is up to students to discern which test they feel will better represent their skills. Over the past decade or so, the percentage of high school grads who took the ACT has jumped from 38% to almost 50%. The test’s boost in popularity is partially because many feel it is more straightforward than the SAT. Here’s a quick breakdown of what to look out for on the ACT.

Before we jump into specifics, it’s probably a good idea to quickly run through how the ACT is scored. First off, unlike the SAT, which penalizes students for wrong answers, the ACT does not. That means it is better to guess, despite the odds, than leave a question blank. With that in mind, remember the ACT grading scale runs from 0-36, with a 36 being the equivalent of 1600 (or, on the recently-defunct scale, 2400) on the SAT exam. Most students end up with a composite score of 20.9, which is in line with the average SAT score. The four scores for each section are averaged for the composite. Get it? Got it? Good. Moving right along to the first section…

The first thing you’ll notice from those above statistics is that you have way less than one minute (about forty seconds, to be exact) to answer each question. That is not the case on the SAT exam. While this is true, the ACT makes up for this time disparity with questions most students find slightly easier than those on the SATs. Your test preference will likely depend on what kind of learner you are. Even though the test as a whole highlights the language of questions, you don’t have to be a literary scholar to knock the English section out of the park.

Most of the questions revolve around the mechanics of grammar, transitions, or punctuation issues. Often, the exam will present a few sample paragraphs about a topic, followed by a handful of questions about the text. If you’re supposed to look for errors or change the text in some way, one of the answers will read NO CHANGE, with the others providing possible solutions. Parts of the text are highlighted for clarity so you know where to look. Though the section has the lowest mean score of any, as long as you don’t make careless mistakes and practice your reading comprehension, you should be able to push through.

Good ol’ math. For some, the math section on the ACT is a sigh of relief, like an oasis in the desert. Others, like yours truly, felt they were headed down a dark tunnel when they flipped the page to the one that read MATHEMATICS. Don’t worry, though; if I could get through it, so can you. The math section reminded me of an eighties movie montage, running through ten years’ worth of math units in a short amount of time. Pre-algebra, algebra, geometry, and trigonometry are all covered via word problems, diagrams, and equations.

The multiple-choice questions are expanded to include five possible answers instead of the standard four. While this may seem like a daunting task at first, the ACT makes it a little easier by allowing graphing calculators. If you know how to use it correctly, the graphing calculator can make a difference between a passing grade and a legendary achievement. Calculator use (and the secret functions you may not know about) is covered extensively in ACT prep courses. It’s one of the main reasons all students planning to sit the test are encouraged to take these classes.

The presence of a science section is perhaps the biggest difference between the ACT and SAT. Students who particularly enjoy science often lean towards the ACT, feeling that it shows off their skills their best. Some students who dislike science, or even those who are interested in the field, but not great at it academically, fear this section more than any other. What these test-takers, in particular, should remember is that this section does not necessarily test your knowledge of science. Rather, it focuses on your ability to problem-solve and come to logical conclusions from given information.

The official name the ACT gives to this section is “Science Reasoning” for this very reason, no pun intended. The section asks students to draw conclusions from data, often presented in the form of tables or charts. Other possibilities in the science section include passages describing experiments, which you will be asked to summarize via multiple-choice questions. Ultimately it is important to remember that, although you might not be brilliant at science, if you have common sense and are prepared, you’ll probably feel as if you are after taking the test.

With an average score of 21.3, the writing section has the highest mean grade of any area on the exam. However, this is most likely because the section is optional. That means that those who choose to do it are likely to be more prepared, or better writers. The section consists of three prompts, which students will be asked to answer in the format of a short essay. Unlike other sections, these essays are scored on a scale of 1 to 6, which is multiplied by 6 to line up with the 36-point scale of the other sections.

My advice for this section is relatively simple: if you think essays are your strength, sit this portion. To my fellow English majors, this section might as well be required; it is a perfect place to showcase your writing aptitude.   Even though you’re going to be tired and tempted to roll out by this point of the exam, remember that colleges look to your scores to see your strengths.

Interested in seeing how your ACT scores affect your acceptance odds to nearly any college in the US? Use College Raptor’s free match tool to find out!