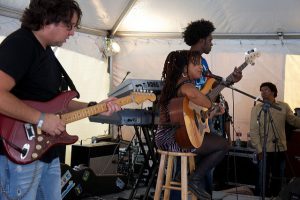 While everyone knows that college is for learning and growing into a productive member of society, it’s important to have fun along the way. Colleges organize many events during the school year, from club fairs to concerts to rallies. One of the more common recreational events is a festival, usually thrown during a certain time of year. Many are held at the end of semesters to mark a break from the stress and insomnia of finals. But, others come as a welcoming event at the beginning of the school year. Here’s a beginner’s guide to some of the most interesting college festivals nationwide, whether school-sanctioned or simply in the area:

The great Groucho Marx once said; “Outside of a dog, a book is man’s best friend. Inside a dog, it’s too dark to read”. Canine jokes aside, we all know the importance of reading, enjoying turning page after page and the feeling of accomplishment that goes along with closing a book for the last time. As if you needed more reasons to be jealous of students that go to USC, vivacious readers will be green with envy at the Festival of Books, held each spring on the Los Angeles campus.

Last April, Trojan students were treated to a “literary extravaganza” which featured luminaries like Marvel comics legend Stan Lee, publisher Ariana Huffington and also astronaut-slash-living legend Buzz Aldrin signing their newest works. Students and locals attend this astounding festival, which is going on its seventh year. It also features artwork, music, and screenings of films. If you’re a bibliophile, this festival couldn’t get any more enticing.

First of all, no, this is not a skiing competition. The (slightly misleading) name of Cornell’s annual big day refers to Libe Slope. It’s a spot on the Ithaca campus where a longstanding tradition was born in 1979. Feeling the excitement in the air at the approaching last day of classes, the college decided to host a cookout on the slope, serving their eager students barbecued chicken. Since its modest inception, Slope Day has exploded into a day-long celebration of the semester’s end. It’s buoyed by performances from music superstars, lawn games and a carnival-like atmosphere.

Over the past few years, artists as varied as Chance the Rapper, Walk the Moon, Drake, Matt & Kim, Nelly, and also TV On The Radio have graced the slope to play music for cheering students. Recently named one of the “Best College Parties in America” by Thrillist, Slope Day is only growing in popularity and serves as something to look forward to for hardworking Cornell students at the end of every semester.

Athletics often serve as a point of unity for college students, an area where all on campus can come together and cheer on their teams. Iowa’s own Drake University is no different, evidenced by their annual Drake Relays event. One of the most prominent track and field events in the nation, the Relays annually draw student-athletes from all over the nation to participate in traditional track & field events. In addition, the events include a homecoming atmosphere for Drake students, with activities including painting streets, food stands, and even a bulldog-judging competition.

A school doesn’t directly put on this final entry on this list, unlike its predecessors. It’s held independently. However, the South by Southwest (SXSW) festival, held annually in Austin, has such close ties to the community culture that its relationship with the local University of Texas is as strong as the others to their schools. SXSW is a summit of culture. It combines music, films, art, and live performances to become one of the most popular festivals anywhere in the country. Like California’s Coachella and New York’s Governors Ball, SXSW is a destination for music lovers. A bevy of major artists performing their hits for thrilled crowds.

Over the past few years, the festival has grown to be the largest music festival in the world in terms of acts. Over a thousand individual artists performed there. UT students celebrate SXSW, as it’s also a key part of Austin’s culture. Students seek to preserve their unique identity through the slogan “Keep Austin Weird”. Some of the various events that have occurred at SXSW over the past few years include the introduction of virtual reality gaming, a speech by President Obama, recording artist Kelis cooking for fans, and even the inauguration of the head of the US Patent Office. Austin is weird and proud of it. SXSW brings out University of Texas students in droves to celebrate the local culture.

Interested in any of these colleges? Check out College Raptor’s free match tool to discover if they’re a great fit for you!