13 of The Weirdest College Traditions

There are strange things happening at college campuses across the country. Students are nailing their shoes to trees, howling at the moon, and kissing statue’s bums with no one giving these weird pastimes a second thought. From the outside looking in, there is no way to explain these odd acts. But, college traditions are a huge part of what takes a bunch of students and makes them a community that lasts a lifetime.

These are 13 of the weirdest college traditions out there: 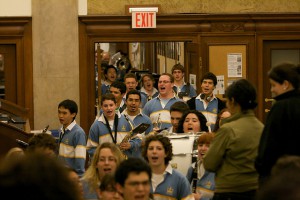 Studying for organic chemistry is by far one of the most stressful and memorable experiences that many students face in their college careers. It’s one of those classes that once done, you’re just thankful to be done.

Due to the rigorous nature of the course, the last thing that you want while studying for the final is any type of distraction. But that is exactly what you get if you’re an “orgo” student at Columbia University. Each year, on the eve of the orgo final, the Columbia marching band heads to the library to entertain all of the orgo students (and anyone else lucky enough to be studying at that time) with the fight song, jokes, and music. The tradition is a great harmless way for students to blow off steam during finals. And if the curve is slightly lower due to the late-night concert, all the better!

Check out more about Columbia University. 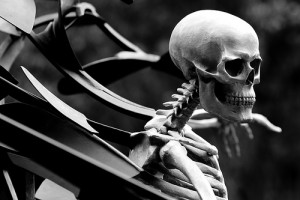 Emory University’s school spirit is guarded by a rather surprising character: a skeleton from the biology department named James W. Dooley often called the Lord of Misrule. Dooley appeared for the first time in 1899 when he wrote a letter to the college publication, The Phoenix. Over the next few years, he appeared more and more often becoming a permanent fixture on campus in the 1940s.

With multiple degrees from the university, Dooley has more power than Emory’s president in one very specific area. On an unspecified day, Dooley “walks” into classrooms across campus, accompanied by his guards, and wordlessly dismisses class for the entire university. Students are then treated by the administration to a day of fun on campus.

Highly anticipated, Dooley Day is by far one of the best days on campus and has, over time, become a week-long spirit celebration. Dooley is so important to Emory, that he has his own email address and his curriculum vitae is displayed online. 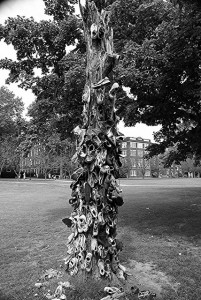 Just outside of the library at Murray State University, a large “tree” is covered top to bottom with mismatched shoes. The tradition of couples nailing their shoes (one from each person) to the tree has been around for decades. Even after the original tree was struck by lightning and burnt down, students continued the tradition on a new tree nearby.

It is understandable that this tradition, strange as it may be, would stand the test of time since the superstition is that those whose shoes are nailed to the tree will have a happy marriage.  Some alumni even return after their children are born to nail their babies’ shoes to the tree as a sign of good luck! 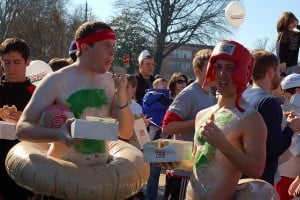 NC State University students have a deep appreciation for dressing in costume. Each Halloween, students pack Hillsborough Street for the annual “Hike,” but one day of playing dress-up simply wouldn’t cut it for the Wolfpack. To fulfill this need, as spring semester rolls around (normally in early February), students take part in the Krispy Kreme Challenge: A 5-mile race to and from the local Krispy Kreme store, where each participant downs a dozen donuts in an hour or less.

The challenge is a highlight of the year for many students who dress in costumes ranging from bananas and the Breaking Bad characters to teams of Crayola crayons and superheroes. All of the money raised from the registration fees is donated to the North Carolina Children’s Hospital, which means that not only is the day a memorable experience, it does a world of good. Last year’s winner had a time of just over 30 minutes. 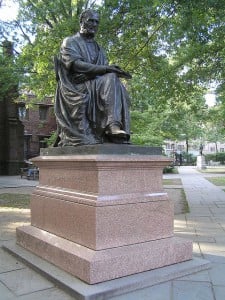 Theodore Dwight Woolsey, class of 1820 and former president of Yale University, has a commemorative statue on campus. Lore states that he was an avid crew fan and that if he attended a regatta, Yale was sure to be the victor. Prospective “Yalies” are told by their tour guides that it is a common practice to rub the toe of Woolsey’s shoe in hopes that some of his luck will rub off on them.

It isn’t until those lucky students become undergrads that they realize this was all just part of a cruel trick.  Another rite of passage to do with Woolsey’s toe? Prior to graduating, some upperclassmen are rumored to urinate on the same toe. 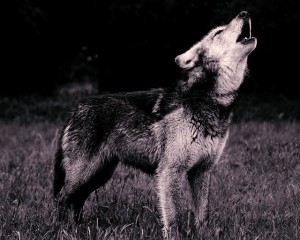 When the movie The Exorcist debuted in 1973, Georgetown University students were some of the most excited moviegoers. Since parts of the movie were filmed on campus, their excitement was understandable. Over the 42 years since the movie first came out, that excitement hasn’t dissipated at GU.

Each Halloween the movie is screened on campus and set to end just before midnight. Students immediately head to the campus cemetery and celebrate–by howling at the moon. The Healy Howl, as it is known, is by far one of the eeriest college traditions and it can be heard throughout campus. 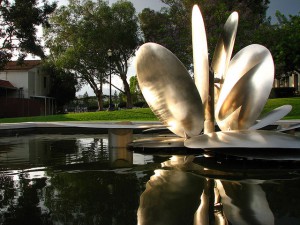 Birthday celebrations in college are generally filled with parties and dinners at Mexican restaurants but if you are a student at Occidental College in Los Angeles, CA your birthday is likely to also include some anxiety.

For years, student’s birthdays have been marked by their friends dunking them in The Fountain. The tricky thing about the tradition is that it can happen at any time. You could be pulled out of bed, the dining hall, or even class! The only guarantee about this tradition? You ARE going in. 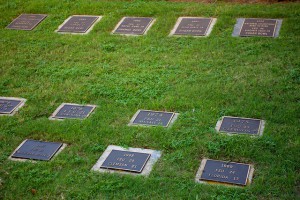 Since the 1962 season, Florida State’s football captains have been charged with a task that is unique to the institution. Any time that the Seminoles win a road game where they were the underdog going in, was played at the University of Florida or was an ACC championship, they bring back a sod souvenir.

These small grassy trophies are then buried in FSU’s sod cemetery, where they are commemorated with plaques and plenty of pomp and circumstance. The tradition is so important that their pre-game radio show is called SodTalk, the athletics department keeps a running record of where each piece of sod came from along with who brought it back and the score of the game, and the cemetery has its own webpage! 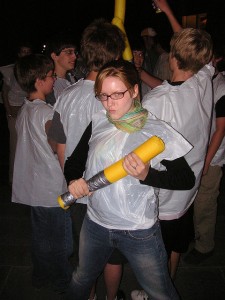 On an evening in early October, foam swords, garbage bags, and pterodactyls are the ingredients for a college tradition unlike any other. The annual Pterodactyl Hunt on campus at Swarthmore College began as an inside joke, but quickly became an event on campus that few are likely to miss. Organized by Psi Phi, the science fiction club on campus, the event is a massive success each year.

Students act either as hunters or monsters and don either white or black garbage bags (called armor and required to participate) to differentiate themselves. Although there are very specific rules and characters, most students are more interested in running around and bashing each other with foam weapons.

Looking for a campus to create your own traditions?
Try the College Raptor match tool–it’s FREE!
Learn More 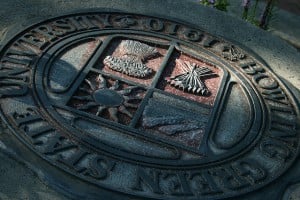 On October 6, 1946, six students were tapped by the President of Bowling Green State University for a secret society unlike any that had come before it. Those six students, drawn to the president’s office in the middle of the night, would become known to the students on campus only as SICSIC.

SICSIC is the oldest active group on campus. With only 6 members each year, it is a secret society that few are lucky enough to be tapped for. The goal of SICSIC is to be the school spirit leaders of BGSU. They show up at football games, on-campus activities, or even right behind you to photobomb your selfie and are always ready to share their love of BGSU! 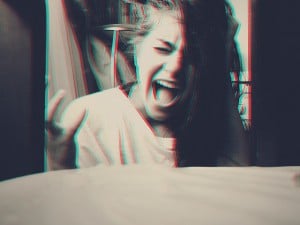 At exactly 10:00 PM the night before finals start, the quiet town of Northfield, MN is rocked by the shrieking and wailing of the Carleton College students. The primal scream is the students’ way of blowing off a little finals studying steam before hitting the books again as if nothing happened.

If that’s not enough de-stressing for you, students have added a new, much quieter, tradition in the past few years. At 11:00 PM on one of the two “reading nights” before finals, students sync up to a master playlist, put their headphones in and press play all at the same time. Then a massive dance party starts at the library and travels to other buildings on campus. 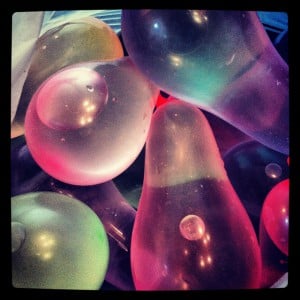 Once called “Step singing,” a day in which each class serenaded the seniors with class songs and original pieces, Vassar College serenades are a time-honored tradition. But over the years it has evolved into less singing and more of a Battle Royale.

The change happened slowly over time, but it is still one of the most memorable days of the year. The freshman class composes original songs (not always full of kind words) and serenades the seniors. As a version of payback, the seniors splatter the freshman with ketchup, chocolate syrup, and other tasty and messy food items. Recently, the College instituted a “water only” rule, which has turned the messy event into a good old fashioned water balloon and Super Soaker fight. 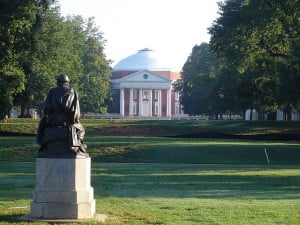 The idea of removing your clothes and running across a large expanse is a common theme among college traditions. People at many campuses across the country see streaking as a sort of rite of passage required before graduation.

But, the students at the University of Virginia have taken things to an all-new level by incorporating their famous 740-foot lawn and a statue of Homer. Students streak down the steps of the rotunda, across the lawn to kiss the statue of Homer (for most students, this kiss usually lands on his bum!) and then back to the rotunda. For students who don’t feel this is daring enough, peering through the keyhole of the rotunda at the statue of Thomas Jefferson before putting their clothes back on is a way to ups the ante.

Check out more information on The University of Virginia.

What are some of your favorite college traditions? We’d love to hear about them in the comments!

One thought on “13 of The Weirdest College Traditions”