Home > Find Colleges > Myths > Myth: My Freshman Roommate Will Either be My Best Friend or Sworn Enemy

Myth: My Freshman Roommate Will Either be My Best Friend or Sworn Enemy 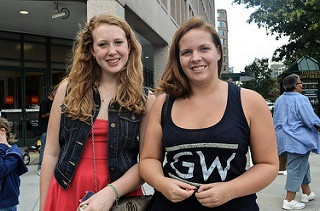 Due to movies, TV shows, books, and stories passed down from person to person, there seems to be two extremes in terms of freshman roommate: the BFF or the mortal enemy. One or the other. Either you’ll be joined at the hip or you’ll be caught in an endless cycle of passive-aggressive pranks and arguments.

While either might (and we emphasize might) be the case, there are certainly other possibilities. Here we’ll talk about different kinds of roommate situations and how best to respond to them. Hopefully along the way we’ll quell some apprehensions and bust some myths.

Let’s start out with the best possible scenario. Whether you were inseparable in high school or you two were just randomly put together and it just happened to work out, say you do become great friends with your roommate: awesome! Since you’re going to be living in such close quarters, it always benefits getting along. The BFF Roomie is great for study practice, talking about personal topics, decorating the room, and just hanging out with.

On the other end of the unlikely spectrum comes the roommate from your nightmares. Maybe you’re a neat person and they’re a total slob. Maybe they’ll never let you have friends over. Maybe they steal your supplies and snacks. Maybe you’ll get noise complaints because of all your arguments. This is very, very, very unlikely to happen, but if you ever do have a big problem with your roommate–talk to your RA (resident assistant) about it. They’re trained to help in these sorts of situation. If worse comes to worse, you can probably swap out roomies after a semester.

College life is very busy, as such students aren’t always in their dorm because they just don’t have time. They’ll be on campus all day, and part of the night, and maybe drag themselves back to sleep and head off again. Sometimes roommates won’t even see each other for long stretches of time. I know people who practically had the rooms to themselves because their roomie was always crashing on other peoples’ couches or spent the whole night in the library. While this can sometimes be ideal to people who like their space, it can also be rather lonely, especially when your friends are talking about roommate-bonding experiences they’ve had.

There are people you get along great with, people you despise, and then there are people that you tolerate. They’re ok–you’re not super close friends but you certainly don’t hate them by any means. You’re more likely to encounter the tolerable roomies than either the BFF or Sworn Enemy. Maybe you have a few things in common, maybe there a few tiny things that annoy you but it’s not the end of the world. The great thing about tolerable roommates is that you can do a few activities together, show each other some new interests, and help each other out with homework, but neither of you will be really clingy.

We’re not talking best friends forever, going to be the best man/maid of honor at a wedding kind of friend. You probably had quite a few friends in high school that you never really hung out with outside of class, but during school hours you enjoyed their company. This is the kind of friend you’re most likely to find in a roommate, except unlike high school you’ll be living with them. This is the ideal situation because you’ll both have lives outside of each other and your dorm, but you’ll also have a friend close at hand should you need them. Hopefully they’re approachable and you guys can figure out any problem that comes up just between yourselves, and resolve it peacefully. This is the sort of roomie you wouldn’t mind living with again next year.

Most colleges have a roommate survey that will try to pick out the best match for you. If this is the case, or if you’re randomly assigned, try reaching out or meeting your new roommate as soon as you can. Introduce yourself and ask them some questions. The sooner you start the line of communication, the sooner you can decide who brings what and how you’re going to get along.

Everybody is different, therefore there is no one “true” roommate, and you’re likely to encounter variations or blends on these archetypes. But at least now you know it’s a fuller spectrum than just Best Friend and Sworn Enemy!

Remember: if you ever have problems with your roommate and you can’t talk it about between the two (or three) of you, contact your RA. Nobody should be driven insane or bullied by their freshman roommate.