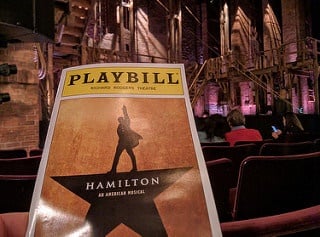 Hamilton: An American Musical is the latest hit Broadway show sweeping the nation. It received a record-breaking 16 Tony nominations, and an impressive 11 Tony wins–including: Best Musical, Best Original Score, Best Direction of a Musical, Best Choreography, and both Best Actor and Best Actress. The contemporary hip-hop and rap musical is about the life of Alexander Hamilton and the foundation of America, and is brimming with creativity, clever lyrics, and history.

Lin-Manuel Miranda, the creator, lyricist, and lead actor–playing the titular character himself–graduated from Wesleyan in 2002. Now launched into international stardom, Lin-Manuel Miranda returned to his alma mater, along with Hamilton director and fellow Wesleyan alum Thomas Kail, to be honored by a scholarship as impressive as the musical itself! There are tons of scholarships for students, and now there’s one offered by Hamilton!

The Wesleyan University Hamilton Prize for Creativity awards its recipient a four-year, full-tuition scholarship. Students must submit a piece of original creative work–a novel, a play, poetry, lyrics, creative non-fiction essays, etc.–that showcases originality, creativity, and artistry, much like Hamilton does. The scholarships for students will be awarded to an incoming Wesleyan student in the class of 2021. Both Miranda and Kail will serve on the judging committee and review the submitted creative pieces.

Of the prize, Lin-Manuel Miranda said: “I’m truly honored and excited that Wesleyan has created this prize. Wesleyan nurtures creativity and encourages students to make connections across disciplines. I got my shot at Broadway thanks to the start I had as an artist in this environment, and I hope this prize will help other young writers to get their start.” In addition to having the scholarship created in honor of his success, Lin-Manuel Miranda was awarded an honorary doctorate from the school as well.

Many notable and influential creators have come through Wesleyan over the years, including: Michael Bay, Daniel Handler (aka Lemony Snicket), Alex Kurtzman, Jeffrey Richards, Matthew Weiner, D.B. Weiss, Joss Whedon, and many more.

Lin-Manuel Miranda is no stranger to stressing the importance of education. Recently he gave a commencement speech at the University of Pennsylvania, and spoke to the 2016 graduates about their lives ahead, the twists and turns it would take, and utilized many storytelling themes during his talk.

While a student at Wesleyan, Miranda wrote the earliest drafts of his first Broadway musical, In the Heights. Miranda also wrote and directed several other plays and musicals at Wesleyan’s student theater company Second Stage. After graduation, Miranda teamed up with John Buffalo Mailer and director Thomas Kail to revise In the Heights–which saw some off-Broadway success before heading to the famed and historic spotlight.

Students interested in attending Wesleyan and applying for the unique scholarships for them should “write like it’s going out of style” as Hamilton does in the musical’s final song of the first act “Non-Stop.” It probably wouldn’t hurt to listen to Hamilton’s soundtrack while working, to channel some inspiration.