Thirteen of the Most Haunted College Campuses in the United States

Whether you believe in ghosts or not, there are endless spooky stories of hauntings surrounding colleges and universities. Ghost stories are often intertwined with a school’s history and culture, and have been passed down generation to generation. 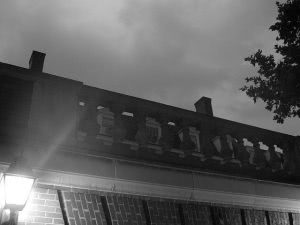 Ohio University is considered to be one of the most haunted campuses (and places) in the United States. The location itself checks off nearly every horror movie cliche. The site of a former insane asylum: check. Built on top of a Native American burial ground: check. Located in the middle of a Pentagram of cemeteries: check.

There are a multitude of ghost stories, the most infamous of which is that of Room 428. In the 1970s, a woman attending the university suddenly started shouting in a strange language and acting bizarrely. She fell to her death and reportedly haunted the school so intensely, that Room 428 of Wilson Hall is sealed shut to this day. 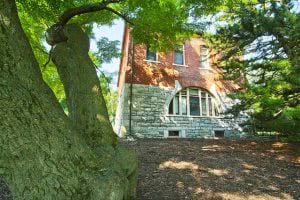 Hauntings are so prominent at this university that they have their very own paranormal research society on campus. Ghosts are deeply rooted in the culture at Penn State. One specter on campus is Frances Atherton, wife of founder George Atherton. The spirit of Frances reportedly lingers in the top floor of the Old Botany building, overlooking her husband’s grave. Students might look up and see a figure in the window.

While there are definitely more traditional ghosts on campus—phantom footsteps, mysterious scratches, objects moving on their own accord—Penn State is home to a rather unusual ghost: a mule. The university’s first mascot, named Old Coaly, reportedly still wanders the halls, and students can hear his clip-clopping hooves and signature bray. 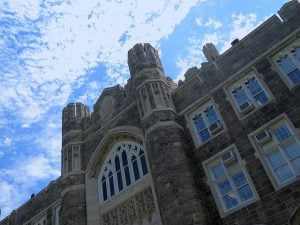 The university’s Gothic architecture definitely gives off a spooky vibe. So much so that the famed horror film The Exorcist was partially filmed at Fordham. In Keating Hall, a young blonde female ghost haunts the showers, staring silently back at students until she disappears. There is also a male ghost, though he tends to disappear as soon as students catch sight of him out of the corners of their eyes. There are also sounds of loud, inexplicable crashing near the stairwells.

In the Finlay Hall, things are a little more sinister. The dorm was built over an old morgue (because of course it was). Students have chilling stories of waking up in the middle of the night to the feeling of someone pulling on their feet, or even wrapping hands around their throat. 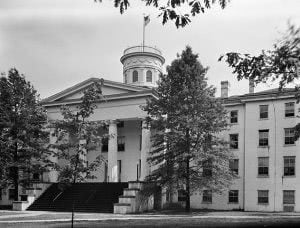 History and hauntings go hand in hand. Gettysburg College was turned into a hospital during the Civil War, tending to the wounds of both the Union and the Confederacy. As such, there are many soldier spirits roaming around this campus. One such ghost is known as the Lone Sentinel, and appears to be a gun-carrying soldier marching atop Penn Hall, who sometimes takes aim at the passing students!

In a truly bone-chilling tale, it’s said that a few college staff were leaving Penn Hall when the elevator malfunctioned and brought them to the basement instead of the first floor. The doors opened and revealed a ghostly hospital scene, with blood-drenched doctors and wounded soldiers racing around. 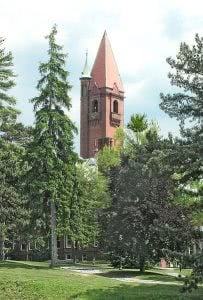 Sites of mass death are often plagued with stories about ghosts. One harsh winter, the campus was hit hard by an influenza epidemic, and the weather was too bad to leave. A hospital / quarantine was set up on the fourth floor of Wells’ main building, where many students died. With no way to bury the bodies, another room was turned into a temporary morgue. The door was painted red, so no one would accidentally enter. After the epidemic, the door was repainted, but soon after the red color bled through. Time and again the door was repainted, and still the red persisted. Reportedly, some students still go searching for the red door now that the building has been redone.

There are so many ghosts and haunted buildings on campus, including Max the Security Guard, who lost his life while evacuating students from a burning building—reportedly students can feel a ghostly hand shoving them in the stairwell, trying to get them out. Another specter haunts Zabriskie Hall. In life, she was a bright science student who discovered that her professor was stealing her work and publishing it as his own. When she confronted him, he stabbed her to death. Her ghost approaches students studying in Zabriskie late at night, asking them to pull the knife out of her back. But be warned: she might try to stab you with it if you try to do so. 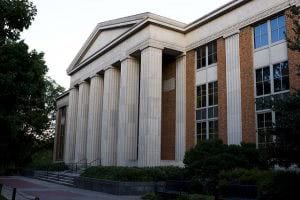 At the University of Georgia, many of the sorority and fraternity houses are haunted. The sad tale of Susie Carithers, former owner of the Alpha Gamma Delta house, is often the centerpiece of the yearly ghost tours on campus. The story goes that she was left at the altar, and she hung herself in the Alpha Gamma Delta house in grief. Residents say they sometimes see her ghost staring out the window of the attic.

Over at the Phi Mu house, the ghost of Anna Hamilton lingers. Her husband was murdered and buried in front of the Phi Mu house, so she watches over his grave. Apparently some brave (or foolish) sorority sisters have attempted to contact Anna with a Ouija board. 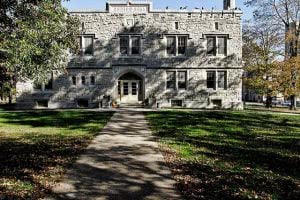 A college with an entrance called “the Gates of Hell”? Yeah, probably haunted. Students avoid the south entrance around midnight, when the church bells chime. If you’re caught crossing through the gates when the bells are ringing, your soul goes straight to Hell…or so the story goes.

In 1949, nine students lost their life in a horrific fire. Today, students claim to hear bloodcurdling screams, see flickering lights, and flushing toilets. Another phantom, known as the Greenhouse Ghost, lost his life in a diving accident at the pool. Students say that he leaves wet footprints around, and randomly turns on showers. 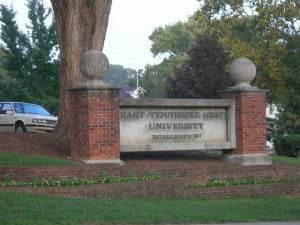 There are a number of ghosts at East Tennessee State, many of which are less malicious than some of the others on our list. Founding President Sidney Gilbreath is a very practical sort of ghost, as he turns off lights that were accidentally left on, and closes windows that people leave open. He also reportedly likes to watch performances at the school’s theater.

Another phantom has earned the moniker of Marble Boy. In Clement Hall, sounds of rolling marbles echo on the upper floors, but no marbles are ever found. The spirit of former teacher Christine Burleson reportedly haunts the portrait of her father that hangs Burleson Hall. Students say that the eyes of David Sinclair Burleson follow them as they walk by. 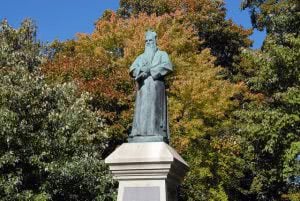 Famous in life and the afterlife, football star George Gipp is an enthusiastic and friendly phantom at Notre Dame. One cold winter night, he got locked out of his dorm and was forced to sleep on the snowy steps. He contracted pneumonia and succumbed to it. On his deathbed, it’s said that his final words were “Tell [the football team] to go in there with all they’ve got and win just one for the Gipper.” In death, “Gipper” still has school spirit as he’ll pat current students on the back, and play mysterious music at night.

Given its Catholic heritage, it may come as no surprise that religious figures haunt the campus as well. Father Sorin, who died on Halloween in 1893, is seen roaming around, watching his school. There are also the spirits of kindly nuns. One story tells of a priest with no feet, that passed through solid walls. 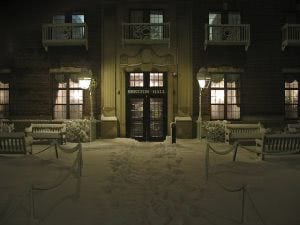 Strange things happen on the fourth floor of Boston University’s Kilachand Hall (formerly Shelton Hall). Prior to the school acquiring the building it was a hotel where dramatist Eugene O’Neill passed away. O’Neill’s ghost is said to remain in the building. The elevator randomly halts on the fourth floor, where the lights are dimmer than anywhere else. Students report hearing knocking on their doors, though no one is on the other side.

O’Neill isn’t the only famous soul rumored to haunt Boston University. Another, more sinister spirit is said to roam Myers Standish Hall—the Boston Strangler, a serial killer from the 1960s. Students say they return to their dorm rooms to find chairs moved and the drawers rummaged through, despite being locked. And Myers’ building code? 666. 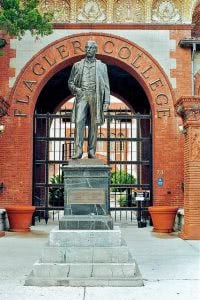 Flagler retains more than just the name of industrialist Henry Flagler, some say the spirit still haunts Ponce de León Hall. Though successful, Flagler led a turbulent personal life. Among his last requests were the instructions to keep windows and doors open during his funeral. Unfortunately, a janitor left many closed, leading to the supernatural theory that Flagler’s spirit is trapped in the hall. Students report that the lights will flicker or go out if you speak his name.

Another spirit is said to haunt Ponce Hall. Legend goes that a little boy was playing on the balcony when he lost his balance and fell to his death. Students report hearing ghostly stomping at late hours. People think it’s the lingering soul of the little boy, still playing. 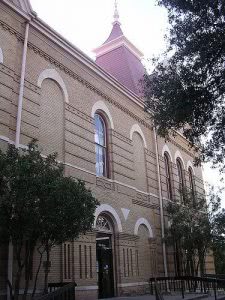 Most freshmen students sign up for a campus tour or attend student org fairs. At Texas State University, ghost tours are given to the freshmen. Old Main is said to be home to multiple spirits, including the ghost of a former female student who carries books and seems to be looking for her classes. One professor recalls a chilling experience when she was on a conference call with some students. The phone reportedly started spouting white noise, and she heard a faint voice speaking gibberish, and managed to hear a whispered ‘Help me.’

A ghost-hunting group visited the school’s Pi Kappa Alpha house to investigate the hauntings there (prior to 2007, when a fire destroyed the building). They found ‘Help me’ and ‘I’m sorry’ carved into kitchen surfaces. Bloody handprints supposedly appeared and vanished as well. 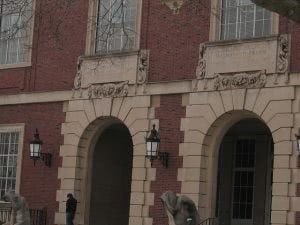 The campus’ English building used to be a women’s dorm, which once had a pool. A female student drowned there, though the stories alternate between saying it was an accident, she took her own life, or she was murdered. Regardless of origin, students say that her ghost wanders the halls and stares out the windows. Ghostly footsteps, closing doors, and disembodied voices are just some of the ways this spirit reaches out into the land of the living.

Many buildings are haunted at U of I, among them: the aforementioned English building, Lincoln, Psychology, several monuments, and the library. There are spooky urban legends that say some students got so lost within the library’s Main Stacks that they died, and now haunt the library. A particular ghost is said to appear at a certain time among the shelves and books. So late-night studying students should beware.

Brave enough to attend any of these schools? With a free College Raptor account you can see if they’re a good college fit for you!