Colleges for Students Who Love Books! 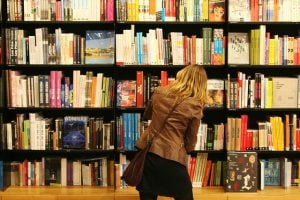 Whether having loved reading since the early years or having only recently discovered the joys of the written word, a bibliophile is one who is rarely seen without a book. They often venture out of their written worlds to discuss characters, plots, and criticisms. They are found in all majors, not just English and Literature-related departments. Some of them might also be dabbling in writing, having been inspired by their forays into the ink and paper forests. Knowing this, some colleges have developed programs and events to celebrate the joys of reading and writing.

Every year in the spring, Agnes Scott College hosts a Writers’ Festival. The tradition is 46 years old, having begun in 1972. It acts as a statewide writing competition for college students in fiction, poetry, creative nonfiction, and dramatic writing. Authors who reach the finals are published in the festival magazine. There are workshops, readings, and visiting authors (notables have included Margaret Atwood, Junot Diaz, and Tim O’Brien, just to name a few), and an alumna returning almost every year. The visiting writers choose the winners in each genre. The 2017 festivities begin April 4th.

If spreading your love of reading is your idea of a good time, consider applying to USC! The Los Angeles Times Festival of Books is the largest book festival in the nation and has been going on for more than 20 years. USC is the host of this monumental event, which is held on its University Park campus. In addition to hosting, USC has a booth called ReadersPlus, at which USC students can tutor and mentor children in math and reading. Even if that is not your thing, you can still attend the largest book festival in the nation. As a bibliophile myself, I’m trying to decide if I can make it to this year’s Festival on April 22nd and 23rd.

In 2008, UNESCO designated Iowa City as the third City of Literature in the world. The first two are Edinburgh, Scotland, and Melbourne, Australia. You can’t swing a stick around the University of Iowa without hitting someone who is writing something. The University is the origin of the writers’ workshop; the Iowa Writers Workshop is one of the most highly contested graduate writing programs in the country. In addition to all these writing resources, Iowa City attracts all sorts of authors and lecturers. Prairie Lights, an independent bookstore through which most English majors buy their books, hosts readings all year round, at which you can usually find students from writing workshop classes asking questions. Then there is the Iowa Summer Writing Festival, the International Writers’ Program, the University’s Special Collections in the Main Library, the Iowa New Play and Ten Minute Festivals, Mission Creek Festival: The list goes on and on and on.

Lone Star College Center for Civic Engagement has taken up a new initiative in the world of literary festivals. They opened with the Lone Star Book Festival in April of 2016, but are renaming it this year to the Bayou City Book Festival. They wanted it to better reflect that this is a city-wide event. The event will bring in nationally and internationally known authors to speak with listeners. There will be opportunities for book-signings, individual discussions with authors, free literary programming, writing workshops, and promotion of diverse works of literature. Last year, the festival brought in more than 150 authors, and the college hopes to repeat the success. Join the fun this year April 3-8!

Another program in its second year is the University of Missouri’s Unbound Book Festival. Held in conjunction with Stephens College, the two colleges will be splitting the events come April 21st and 22nd this year. The event aims to bring authors to Columbia for discussions, Q and A’s (you get to post questions ahead of time for individual authors), author interviews conducted by other authors, and programs for Fiction, Nonfiction, Poetry, and Children’s Events. According to the festival website, all this interactive fun will be held to “help raise funds and awareness to improve literacy standards throughout the State of Missouri.”